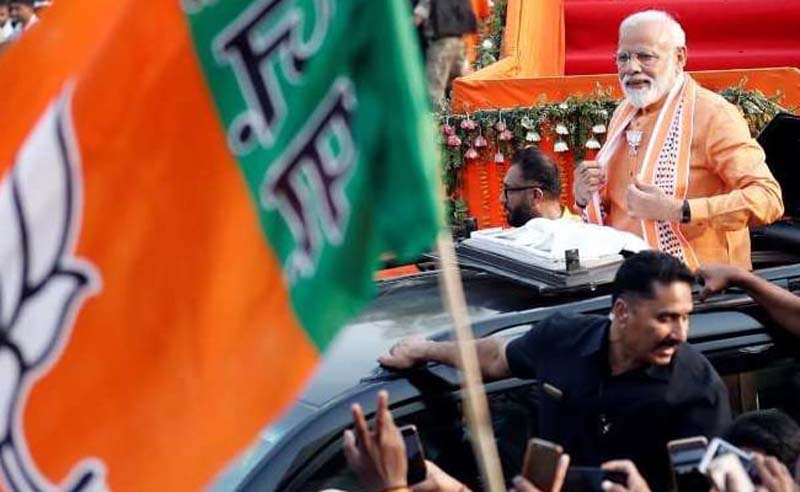 PATNA/NEW DELHI, May 20: Opposition parties today doubted the exit poll projections that the BJP-led NDA will retain power at the Centre, calling it “speculation” and “fraud” and contrary to ground reality but the ruling party asserted that the final result will be in consonance with the predictions.
Exit Polls on Sunday had forecast another term for Prime Minister Narendra Modi, with some of them projecting that the NDA will get more than 300 seats to comfortably cross the majority mark of 272 in the Lok Sabha.
As the Exit Polls triggered a debate whether it could be right or wrong, Union minister Nitin Gadkari said they are not the “final decision” but indicate that the BJP will once again come to power, riding on the development work done by the NDA Government.
“Exit Polls are not the final decision, but are indications. But, by and large, what comes out in the Exit Polls also reflects in the results,” Gadkari told reporters in Nagpur.
Counting of votes in the seven-phase Lok Sabha polls will be taken up on May 23.
Finance Minister Arun Jaitley said the results will be in consonance with the outcome of multiple exit polls.
“Many of us may continue to squabble over correctness and accuracy of the Exit Polls. The hard reality is that when multiple Exit Polls convey the same message, the direction of the result broadly would be in consonance with the message,” the senior BJP leader said in a blogpost titled ‘The Message of Exit Polls’.
Kerala Chief Minister Pinarayi Vijayan said there is no need to rely on “speculations based on speculation”.
The CPI-M veteran, who met media persons in Thiruvananthapuram soon after he returned from a 13-day Europe trip, exuded confidence that the CPI(M)-led Left Democratic Front (LDF) will record an impressive win in Kerala. The Exit Polls have forecast a poor showing by the ruling Left Front.
“There have been many instances earlier when the Exit Polls have failed to accurately predict the election results. Majority of the Exit Polls in 2004 had predicted continuation of NDA rule at the Centre, but this was proved wrong. So there is no need to rely on speculations based on speculation.”
Rejecting the Exit Polls as a “fraud”, RJD leader Tejashwi Yadav said they are simply compulsions of the market purveyed through a different name.
“It is an old trick of psychological manipulation of the deprived classes by Sangh- supported institutions and resources,” he said in a statement. Yadav also said the Exit Poll results do not reflect the ground reality.
Yadav’s views were endorsed by veteran socialist leader Sharad Yadav, who is contesting from Madhepura on the ticket of the RJD with which he is expected to merge his own party LJD.
The Trinamool Congress, which has dubbed Exit Polls as “gossip”, said its internal reports from districts in West Bengal and every constituencies clearly say the party will win this time too.
Unfazed by Exit Polls projections, the Mamata Banerjee-led TMC exuded confidence that it would play a major role in the formation of a new Government for which it is in touch with various opposition parties.
Some of the Exit Polls predicted TMC getting 24 seats, the BJP bagging 16, the Congress two and the Left Front drawing a blank.
West Bengal has a total of 42 Lok Sabha seats. The TMC and BJP won 34 and 2 seats respectively in 2014.
Banerjee on Sunday had said she did not trust such surveys as the “game plan” was to use them for “manipulation” of the EVMs. She dubbed the Exit Polls as “gossip”.
Dismissing the Exit Poll predictions, TMC secretary general Partha Chatterjee said the party is not worried about the projections, which, he said in most cases do not match with the reality.
Hitting out at the pollsters, Karnataka Chief Minister H D Kumaraswamy claimed that the “artificially engineered” or “manufactured” Modi wave is being used by the BJP to lure regional parties well in advance to fill any shortfall after the results on May 23.
In a series of tweets, the JD(S) leader also said the Exit Poll surveys only reiterated the serious concern of the Opposition parties on the ruling party allegedly misusing Electronic Voting Machines(EVMs) for electoral gains.
Deputy Chief Minister and Congress leader G Parameshwara too raised doubts over the EVMs, claiming that the BJP had sponsored the Exit Polls as the ground reality was different.
Rajya Sabha member B K Hariprasad said the Exit Polls were the reflection of the wishes of news channels where Modi wave is prevalent.
However, State BJP president B S Yeddyurappa said people of the country as well as Karnataka have supported Modi and the Exit Polls giving 22 of the 28 seats to the saffron party in the State was a proof of that.
The Congress and the Janata Dal (Secular) leaders questioning the EVMs shows their desperation, he added.
Congress leader Shashi Tharoor went on to give the example of the recent Australian Exit Polls to emphasise that they do not always end up being correct.
“I believe the Exit Polls are all wrong. In Australia last weekend, 56 different Exit Polls proved wrong. In India many people don’t tell pollsters the truth fearing they might be from the Government. Will wait till …,” he tweeted.
Tamil Nadu Chief Minister K Palaniswami made light of the exit polls suggesting a poor showing by the AIADMK, saying they were more of “imposing of opinion” and that the predictions will be proved wrong.
The ruling AIADMK, an ally of the BJP, will win all the 38 seats in the State and one in Puducherry, he claimed.
Even as the exit polls predicted a good show for his party, DMK president M K Stalin said he does not take the projections seriously and would wait for three days to know the people’s mandate. (PTI)