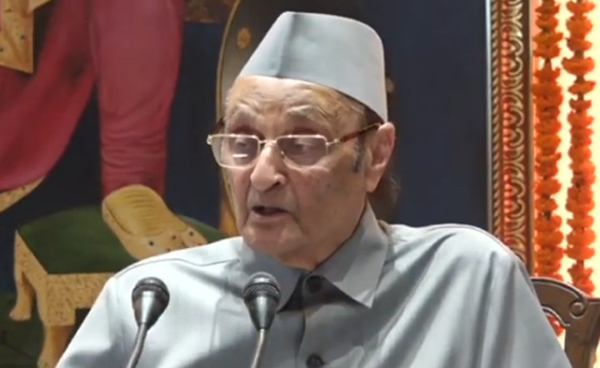 JAMMU, September 9: Veteran leader and son of great monarch Maharaja Hari Singh, Dr Karan Singh has endorsed the demand raised by the youths of Jammu region regarding a gazetted holiday on September 23 to mark the birth anniversary of the last ruler of the kingdom of Jammu and Kashmir.
In a statement issued here today, the former Member Parliament said “There has been a long-standing demand and agitation among the youth in Jammu for a holiday on the birthday of my respected father Maharaja Hark Singh ji, which I strongly support. Bapu ji was a highly respected figure not only because he signed the historic Instrument of Accession to India but also because of the many progressive measures that he undertook during his reign. These include throwing of Dharmarth Temples open to the Dalits, abolishing the obnoxious policy of ‘begar’, forced labour in Kashmir, building fine colleges and hospitals both in Jammu and Srinagar and so on.”
“I understand that the agitation is on hold for a few days. I would urge the U.T. Government to reconsider the whole matter and accept the demand which will be widely appreciated not only by the youth of Jammu but by citizens of the State in general. Continued agitation and disruption of normal life is not desirable in the highly sensitive border region of Jammu. I have conveyed my views on this matter to the Hon’ble Prime Minister,” the former Member Parliament added.