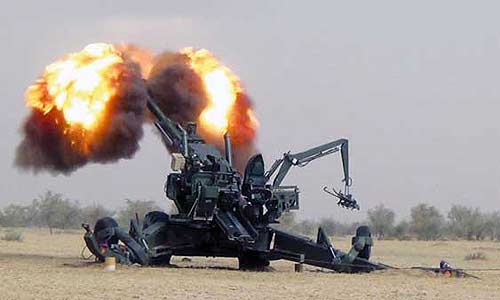 JABALPUR: India’s first indigenous, long-range artillery gun “Dhanush” has passed its final test at Pokhran, paving the way for its induction into the Army, a senior official said today.

Dhanush is a 155mm x 45mm calibre artillery gun and is also called the “desi Bofors”.

“Six guns in battery formation (at one go and at one target) successfully fired 101 rounds on June 7,” Singh informed.

He said that the GCF got the Dhanush project in October 2011 and the first prototype was made in 2014.  Later, 11 more prototypes were made from which 4,200 rounds were fired.

The gun has passed tests under severe cold conditions in Sikkim and Leh and in hot and humid weather in Balasore, Odisha, Babina in Jhansi and in the desert of Pokhran in Rajasthan, Singh said. (AGENCIES)