NEW DELHI: A senior official of the Delimitation Commission on Wednesday held consultations with all deputy commissioners of Jammu and Kashmir on restructuring of the existing assembly constituencies and carving out seven new seats.
At a virtual meet attended by all the 20 DCs, inputs were gathered on how to make the assembly seats more geographically compact, sources aware of the development said.
Some assembly seats in Jammu and Kashmir have to be reserved for the Scheduled Tribe as part of the delimitation exercise, the sources pointed out.
After the delimitation exercise, the number of assembly seats in Jammu and Kashmir will go up from 83 to 90.
Twenty-four seats of the Assembly continue to remain vacant as they fall in Pakistan-occupied Kashmir (PoK).
The delimitation panel had recently sought data on the area of existing constituencies, including geography and facilities available, and had asked the deputy commissioners for their suggestions to make them more “geographically compact”.
Having received the data and suggestions, the Delimitation Commission decided to hold the virtual meeting with the DCs to take forward the matter.
The development comes amid efforts by the Centre to bolster political processes in Jammu and Kashmir. Prime Minister Narendra Modi is scheduled to chair a meeting with a select group of political leaders from Jammu and Kashmir on Thursday, which is expected to set the road map for holding assembly elections there.
Jammu and Kashmir has been under the Centre”s rule since November 2018 and in August 5, 2019, the Centre abrogated its special status and bifurcated it into union territories of Jammu and Kashmir and Ladakh.
The Delimitation Commission had asked the DCs whether a constituency is in one district or spread across two. They were also asked about details of tehsils.
Set up in March last year, the Delimitation Commission is mandated to redraw the constituencies of Jammu and Kashmir which at present is under central rule.
This year, the panel headed by Justice Ranjana Desai (retd), a former Supreme Court judge, was given one more year to complete its task. (AGENCY) 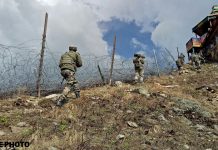