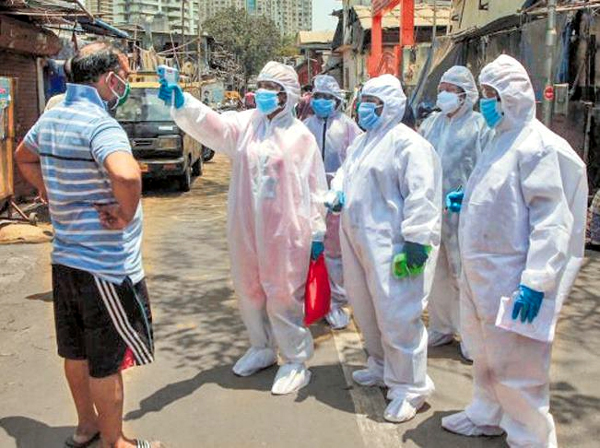 The Centre today said the rising number of daily COVID-19 cases in some states remains a cause of concern and while a few others like Delhi and Maharashtra are plateauing in terms of daily cases, these are “very early signals” and containment efforts have to continue to break the chain of transmission.
Addressing a news briefing, Joint Secretary in the Health Ministry Lav Agarwal said 13 States, including Delhi, Chhattisgarh, Maharashtra, Punjab, Jharkhand and Uttar Pradesh, are showing early signs of plateauing or decrease in daily new COVID-19 cases.
He said states like Bihar, Rajasthan, Haryana, Tamil Nadu, Andhra Pradesh, Kerala, Karnataka and West Bengal are still showing an increase in daily infections.
Delhi, which had recorded 25,294 cases on April 24, registered 24,253 cases on May 2. Similarly, Maharashtra had reported 65,442 infections on April 24 and 62,417 on April 30.
Chhattisgarh, where 15,583 cases were reported on April 29, recorded 14,087 fresh cases on May 2.
A similar trend has been seen in Daman and Diu, Gujarat, Jharkhand, Ladakh, Lakshadweep, Madhya Pradesh, Punjab, Telangana, Uttar Pradesh and Uttarakhand.
On the situation in districts, Agarwal said Durg, Gariyaband, Raipur, Rajnandgaon in Chhattisgarh; Chhindwara, Guna, Shajapur in Madhya Pradesh, Leh in Ladakh; Nirmal in Telangana are showing signs of decline in cases in the last 15 days.
Agarwal said 12 districts of Maharashtra are also showing signs of a decline during the period.
“However, these are very early signals. It is important to have continued efforts of containment at district and State level so that we can preserve these gains and reduce cases further,” he said.
He further said there are 12 States where active cases are more than a lakh.
They are Maharashtra, Gujarat, Delhi, Haryana, Uttar Pradesh, Bihar, West Bengal, Chhattisgarh, Andhra Pradesh, Karnataka, Kerala, Tamil Nadu.
There are seven States where the active cases are in the range of 50,000 to 1 lakh cases and 17 states where the active cases are more than 50,000.
There are 22 states where the positivity rate is more than 15 percent and in nine States the positivity rate is between 5 to 15 percent and in five States it is less than five percent.
He said States and Union Territories like Andaman and Nicobar, Andhra Pradesh, Arunachal Pradesh, Assam, Bihar, Goa, Haryana, Himachal Pradesh, Jammu and Kashmir, Karnataka, Kerala, Manipur, Mizoram, Nagaland, Meghalaya and Odisha are showing an increasing trend in daily cases.
Puducherry, Rajasthan, Sikkim, Tamil Nadu, Tripura and West Bengal are also in the same situation.
“Today, it is important to analyse the cases at micro-level and continue with the efforts in the areas from where the cases are being reported,” he said.
On vaccine coverage, the Joint Secretary said cumulatively 15.72 crore doses have been given  — first dose to 12.83 crore people and second dose for 2.89 crore.
These include 12.07 crore doses (first dose for 10.53 crore people and second dose for 1.54 crore)  which have been administered to those aged 45 and above.
The number of individuals in the age group of 18-44 who have taken the first dose of the vaccine is 0.02 crore.
Twelve states have started COVID-19 vaccination for individuals in the age group of 18-44 years from May 1, Agarwal informed.
This is “an additionality” as there was a demand from several quarters. But based on evidence our priority continues to be those above 45 and they are still being vaccinated free of cost at Government centres, he highlighted.
On declaring journalists as frontline workers, Agarwal said, “Every person in some way or the other is a frontline worker today.”
“We have chosen only those who were involved in the containment work. But now we have expanded the vaccination programme and relaxed the age limit so much so that even if one is not a frontliner, he or she can get inoculated,” he said.
AIIMS Director Dr Randeep Guleria warned against rushing for CT scans in cases of mild COVID-19, saying there are side effects and it can end up doing more harm than good.
“One CT scan is equal to 300 to 400 chest X-rays. According to data, repeated CT scans in younger age groups increases the risk of cancer in later life.
“Exposing yourself to radiation again and again may cause damage. So there is no point in doing CT scan in mild COVID-19 cases if oxygen saturation is normal,” he said.
He said many people take steroids in early stage itself which could lead to replication of the virus.
“Steroids are for moderate illness only and patients with mild illness under home isolation, do not require the same, he said, adding CT scans are biomarkers are being misused and they can be harmful as well.
On mutant strains, Agarwal said the field strategy for management of COVID-19 remains the same irrespective of it being caused by a double mutant virus or UK variant or South Africa or Brazil mutant.
“Some mutants have higher transmissibility, but mutant or no mutant, the actions to be taken to control the disease remains the same. We cannot be complacent in following COVID appropriate behaviour,” he stated. (PTI)