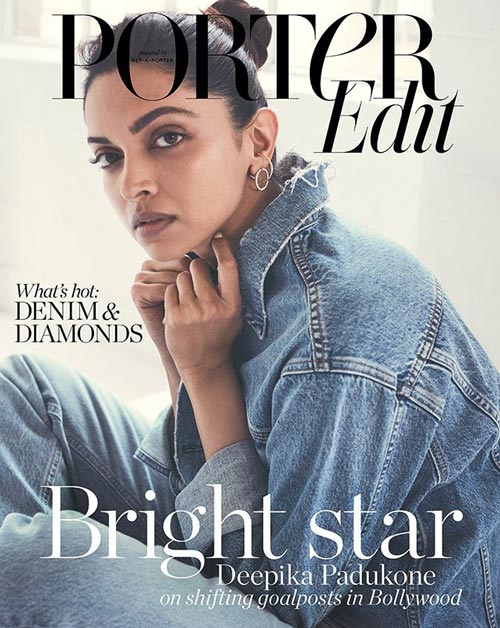 NEW DELHI: Global Icon Deepika Padukone slays as she becomes the cover girl of the International Porter Edit Magazine for their August issue.
It is a leading magazine from the UK and the actress has left us in awe as she dons the denim look flawlessly.
The leading lady of Bollywood, Deepika looks gorgeous as she wears denim on denim with bare minimum make up with hair tied in a bun and accessorized the look with silver earrings.
The magazine took to the social media and released the cover, “Modeling the season’s hottest denim pieces and ultra-luxe diamond jewelry, Bollywood superstar @deepikapadukone
talks to #PorterEdit about taking fashion risks, Hollywood’s diversity issue and why she speaks out about depression”.
Recently, Deepika featured on the Vogue cover with a bare face and no make up.
The actress had left us spellbound with her beauty and continues to give us major fashion goals.
Both the magazines have given us back to back cover looks of Deepika where she continues her rule, taking the nation on the world map as always.
Deepika is known for her versatile choice of films and her role for ‘Chhapaak’ of ‘Lakshmi’ is proof that the actress is a perfect blend of a critically and commercially proven actor who has essayed a variety of strong and powerful roles.
She has actively been involved in prepping for both the characters and is grasping the nuances so as to get into the skin of both which also happen to be in stark contrast with each other.
The year 2020 will be special as both her upcoming films are releasing in the same year and interestingly, both the characters Laxmi Agarwal and Romi Dev are real-life characters with the heavy background behind them, making it a year of promising portrayals by the actress.
(AGENCIES)