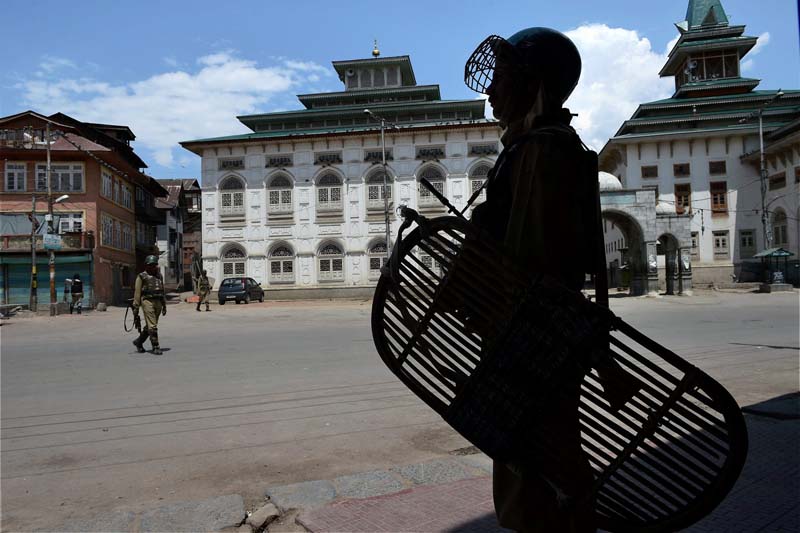 Fayaz Bukhari
SRINAGAR, May 24: Authorities today imposed curfew in many parts of Kashmir and closed down schools and colleges to prevent violence after the killing of commander-in-chief of Ansarul Gazwat-ul-Hind, an affiliate of Al-Qaeda, Zakir Musa, in an overnight gun battle in Dadsara village of Tral area of South Kashmir’s Pulwama district.

Click here to watch video
Authorities imposed curfew and curfew like restrictions in parts of Kashmir to prevent protests against the killing of Musa. Police and CRPF were heavily deployed in several parts of downtown area of Srinagar since morning to prevent any protests. They had barricaded roads with concertina wire to prevent movement of the people and vehicles.
The Friday prayers at the historic Jamia Masjid in Old City Nowhatta in Srinagar were disallowed by the authorities for the second consecutive week.
Curfew like restrictions were also imposed in Anantnag, Shopian, Pulwama, Kulgam, Awantipora and other major towns in South Kashmir and security forces were heavily deployed to prevent any violence.
Authorities closed down schools and colleges as a precautionary measure. The train services were also suspended between Banihal and Baramulla. The colleges and schools will also remain closed tomorrow as a precautionary measure. Train services will also remain suspended on Saturday.
All the shops, business establishments, petrol pumps and private offices remained closed today while as the vehicular movement was also off the roads.
Clashes erupted between youth and security forces at various places in Srinagar and other areas today during which over a dozen protesters were injured.
The clashes broke out after mandatory congregational prayers at various places including Habba Kadal, Batamaloo, Sopore, Kupwara town, Batergam, Trehgam and many other areas of South Kashmir districts.
Despite restrictions, thousands of people took part in the last rites of Musa despite heavy rains in the area.
Hurriyat Conference chairman, Syed Ali Shah Geelani called for shut down tomorrow against the killing of Zakir Musa.
Musa was trapped by troops last evening in a three storey house in Dadsara village of Tral after Army’s 42 RR, SOG and CRPF cordoned off the village following inputs of his presence.
He was asked by the troops to surrender but he fired some UBGL grenades leading to a gun battle. The gun battle continued throughout the night as he kept changing locations in the three-storeyed building where he was hiding.
He was killed in the encounter and his body was found at around 6 a.m. His body was taken by the police and later handed over to his family.
Zakir Rashid Bhat, 24, also known as Zakir Musa was doing Civil Engineering course in Chandigarh in 2013 and quit it to become a militant of Hizbul Mujahideen. After differences with Hizbul Mujahideen, he formed his own group and was named as chief of Ansarul Gazwatul Hind, an affiliate of Al-Qaeda in 2017.
According to the police records, Zakir had a long history of militancy records since 2013. He was initially associated with HM but then he floated new outfit Ansar Ghazwat-ul-Hind (AGuH).
As per police records, Zakir was involved in planning and executing series of attacks in the area and many other civilian atrocities. “Several cases were registered against him. He was involved in case FIR No 126/2014 pertaining to the grenade attack on CISF at Noorpora Check, Case FIR No 135/2014 pertaining to abduction and killing of a civilian Firdous Ahmad Hurrah of Dusoo Pulwama, Case FIR No. 24/2015 pertaining to inciting youth for terrorist activities, Case FIR No. 39/2016 regarding the killing of a civilian lady Hameed Bano of Noorpora, Case FIR No. 190/2016 pertaining to snatching of weapons from security forces, Case FIR No. 165/2016 about an arson act on Govt Higher Secondary School Dadsara, Case FIR No. 170/2016 pertaining to anti-National activities, Case FIR No. 80/2017 regarding to other terrorist activities, Case FIR No. 139/2017 pertaining to bank dacoity at J&K Bank Noorpora, Case FIR No. 50/2018 about the raising of funds for terrorist activities. Besides several other terror cases were registered against him for terror attacks and civilian atrocities in the area”, Police said.
It added that he had been declared as pro-claimed offender by NIA special court Mohali Punjab on May 2 this year in NIA case (RC-39/2018/NIA/DLI. “The said case pertains to his involvement in serial blasts at Jalandhar Punjab on 14th September, 2018 for which case FIR No. 163/2018 was registered at Police Station Maqsudan Jalandhar. The investigation of the case was later taken by the NIA”, Police said.
Police said incriminating materials including arms and ammunition were recovered from the site of encounter. Police has registered a case and all these materials have been taken in the case records.
Militants tonight fired two UBGL grenades at CRPF camp of 14th battalion near Sports Stadium Batpora Shopian. The grenades exploded outside the camp without causing any damage. The CRPF men fired to repulse the militant attack. The troops immediately cordoned off the area but militants fled away.