E-Paper
Home Todays story Construction of bunkers yet to begin in 5 border distts, only 100... 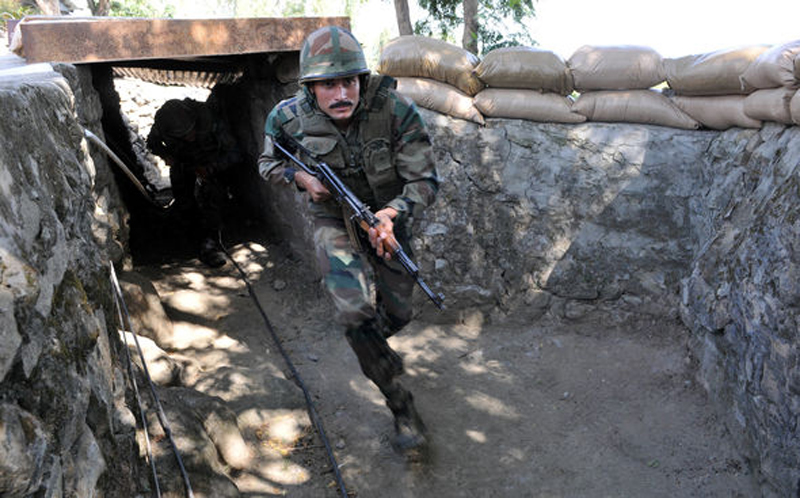 Mohinder Verma
JAMMU, Sept 20: Despite repeated directions from the Union Ministry of Home Affairs, construction of individual and community bunkers for the people living along International Border and Line of Control with Pakistan has yet not begun in five border districts of Jammu and Kashmir and work on only 100 bunkers has been taken up in rest of the three districts till date.
Moreover, the Government has failed to appoint new State level Nodal Officer, who is supposed to ensure increased focus on implementation of various welfare programmes aimed at the welfare of the border residents and monitor construction of bunkers in eight border districts of the State.
Official sources told EXCELSIOR that ever since the sanctioning of 13029 individual and 1431 community type bunkers for eight border districts of the State at the cost of Rs 415 crore, the Union Ministry of Home Affairs is laying stress on pacing up of construction work so that safety and security of the border residents is ensured as early as possible.
Actually the Union Ministry had started sounding J&K authorities about this mega project much before according formal sanction and announcement of funds and objective behind this step was to ensure that J&K remains in the state of readiness to execute the task, sources further said.
“During the past several months the Department of J&K Affairs in the Union Ministry of Home Affairs has even dashed numerous letters to the Home Department of the State asking for expediting the work and ensuring close monitoring of the construction activities by constituting committees of the officers at different level”, they further said.
Though in response to the communications of the Union Ministry the State Government has constituted committees at different level yet work has started only in the districts of Jammu, Samba and Kathua while as construction work has yet not been allotted in Rajouri, Poonch, Baramulla, Bandipora and Kupwara districts, sources informed.
As per the official figures, as against 1200 individual and 120 community bunkers in Jammu, 2477 individual and 8 community bunkers in Samba and 1956 individual and 170 community bunkers in Kathua the work is in progress on only 100 bunkers although allotment of 90% work has already been done by the Roads and Buildings Department by following the laid down procedure.
“This progress is also not up to the expectations of the Union Ministry of Home Affairs, which is receiving regular update on construction work from the State authorities”, sources said while disclosing that during his recent visit to Jammu the Union Home Minister Rajnath Singh had also expressed concern over delay in allotment of work in remaining five districts.
They disclosed that for 4696 individual and 335 community bunkers in Rajouri and 1320 individual and 688 community bunkers in Poonch the Roads and Buildings Department of the State had floated e-tenders twice but there was absolutely no response. “Now, e-tender has been floated for the third time and it is expected that some contractors will come forward for construction of bunkers”, sources added.
They further disclosed that construction of bunkers has also not started in other three border districts—Kupwara, Baramulla and Bandipora. “We are facing problems due to poor response to the e-tenders”, said an officer assigned the task of monitoring the work and coordinating with various agencies and departments.
Moreover, the Government has failed to appoint new State level Nodal Officer to ensure increased focus not only on construction of bunkers but also on implementation of various welfare schemes with regard to the border residents.
Vide Government Order No.1040-Home dated August 7, 2018 a KAS officer, who was holding the post of Additional Secretary to Government, Home Department, was nominated as State level Nodal Officer. However, few days back the officer was transferred from the Home Department but in his place no other Nodal Officer has been nominated till date.
Due to inordinate delay in start of work on bunkers particularly in Rajouri and Poonch districts resentment is brewing among the inhabitants of the border people. “The Government should have started the work either through Roads and Buildings Department or Rural Development Department instead of waiting for proper response to the e-tenders”, some border people said, adding “safety and security of the inhabitants of border areas cannot be held hostage to procedural formalities”.