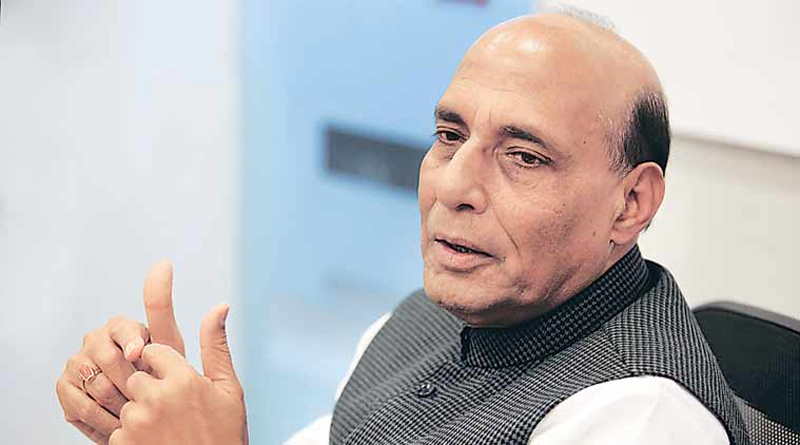 Sanjeev Pargal
JAMMU, Sept 20: Union Home Minister Rajnath Singh today reviewed situation along the International Border (IB) in Jammu sector in the aftermath of brutal killing of a Border Security Force (BSF) soldier, Narendra Kumar of Sonepat, Haryana, the other day and gave BSF a free hand to deal with the situation.
Sources told the Excelsior that Rajnath met Director General of BSF KK Sharma and other senior officers of the Ministry of Home Affairs to discuss the situation after the brutal killing of Narendra Kumar by the Pakistani troops
Rajnath told the BSF to take strongest possible action against the Pakistani troops.
He directed top officials of the BSF that the strongest possible action should be taken against the Pakistani troops involved in Tuesday’s incident.
The BSF jawan’s throat was slit and his body bore multiple bullet injuries. The missing trooper was found killed by Pakistani troops in Ramgarh sector of Samba district, in a first-of-its-kind barbaric act against Indian forces along the International Border.
Sources said the BSF could take some “pro-active” action against the Pakistan Rangers to “avenge” the mutilation of the jawan’s body.
Sources said Rajnath Singh has been given detailed briefing on the situation prevailing along the International Border after the killing of jawan by the BSF chief. The situation was tense. Even people living along the International Border were worried that Pakistan could violate ceasefire and target innocent civilians once again.
Late tonight, Pakistani Rangers fired few shots in Ramgarh. The BSF retaliated. Exchange of firing lasted few minutes. No loss of life was reported on the Indian side.
The BSF has, meanwhile, registered a strong protest with its Pakistani counterpart over the killing and slitting of throat of the jawan.
The BSF has told the Pakistani Rangers that the act was “unsoldierly”, sources said.
The sources said the Pakistani side, which spoke to the Border Security Force officials in the noon over phone, “denied any hand” in the killing of Narender on September 18.
The Indian side termed the act as “unsoldierly”.
Pakistan was informed that their troops “shot and killed” the BSF trooper.
They added that on getting this response, the BSF told the other side that any future misadventure on the India-Pakistan border will be the responsibility of the Pakistani Rangers.
“A brief phone call talk took place between the two sides this noon. When it was brought to the notice of Pakistan that they had killed the jawan by resorting to unprovoked fire, they flatly refused any hand of their troops in the incident,” sources said.
This was the second round of protest that the BSF registered with their counterparts in the last over three days over the killing and throat slitting of their jawan who along with seven others had gone beyond the border fence in the Ramgarh sector as part of a elephant grass (sarkanda) cutting patrol.
The official said the force has issued a “high alert” to all its forward locations on the 192-km-long frontier in Jammu in the backdrop of this incident which is suspected to be “handiwork of a probably a pair of troops from the other side”.
The force, they said, has also observed the movement of helicopters and drones in the forward locations across the border in Jammu and hence border posts and patrols have been asked to remain extra vigilant, they said.
The force has also sought Sector Commander-level (Deputy Inspector General rank level) talks between the two sides in Jammu to thrash out issues but has not received any positive response.
They added that various field formations of the force have been receiving ‘spoof calls’ from across the border where people masquerading as Government intelligence operatives or journalists are wanting to seek details about the incident.
Over a dozen calls have been received over the last two days on the personal and official numbers of field officers and it is suspected that the calls are being made from across the border, they said.
PTI adds from New Delhi:
India today termed as “barbaric” the killing of a BSF jawan by Pakistani troops along the International Border and said it will take up the issue with Pakistan in an “appropriate” manner.
“We are ascertaining the facts on this matter…I can say (it is) a barbaric incident which not only defies logic, not only defies civilized behaviour, but also is against all international norms,” Ministry of External Affairs spokesperson Raveesh Kumar said.
He said the BSF had strongly taken up the matter with their counterpart on the Pakistani side.
“It is a very serious issue and definitely we will take it up with the Pakistani side in an appropriate manner,” he said.