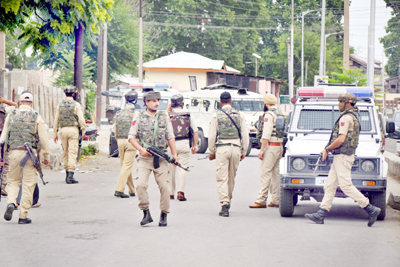 Excelsior Correspondent
SRINAGAR, June 15: A youth was killed and two injured after Army allegedly opened fire in Nowpora Payeen area of Lassipora in South Kashmir’s Pulwama district today.
Sources said that Army’s 55 RR patrolling party came under stone pelting in the area. The soldiers opened few shots to disperse the protesters. Three civilians including the girl identified as Ruqaya Jan daughter of Ghulam Mohammad Magray were injured and have been hospitalized for treatment.
Click here to watch video
One among the seriously injured youth Viqas Ahmad Rather, 17, was referred to SMHS Srinagar hospital where doctors declared him as brought dead.
Srinagar based Defence spokesman  while giving details of the incident said that Army personnel were conducting an area domination patrol. “The road at Naupora was blocked due to 3-4 cars being parked on the wrong side of the road. Army personnel got off their vehicle to request the drivers/ owners to move the cars. The house reportedly belonged to Aabid Manzoor Magray. On seeing the Army personnel, a huge crowd gathered at the site and started pelting stones and closing on to the troops endangering the safety of the troops and Government property. The troops cautioned the crowd verbally. However, the mob turned violent and tried to overpower the troops. Army personnel resorted to aerial firing, extricated themselves and continued with their patrol”, the spokesman said.
And two policemen and equal number of civilians were injured in a militant attack near SMHS hospital in Kaka Sarai area of Srinagar this afternoon.
Militants opened fire on a police naka party, resulting in injuries to two cops and as many civilians. All the injured were shifted to a hospital for treatment.
The area was cordoned off. However, militants managed to escape from the spot.
The injured were removed to nearby SMHS hospital for treatment and condition of one of the cops is stated to be critical.
The attack that came a day after the killing of Shujaat Bukhari and his PSOs created panic in the area.