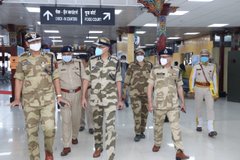 NEW DELHI/LEH: The Central Industrial Security Force (CISF) on Wednesday took over the security of the Leh airport, the country’s highest-altitude commercial aerodrome in the newly created Union Territory of Ladakh.

A contingent of 185 CISF personnel will provide round-the-clock, armed security to the strategic and “hypersensitive” airport, located at 3,256 metres above sea level, a senior officer of the paramilitary force said.

The Kushok Bakula Rimpochee Airport, operated by the Airports Authority of India (AAI), is the 64th civil airport to be brought under the cover of the CISF. It was being guarded by the local police till now.  (AGENCIES)