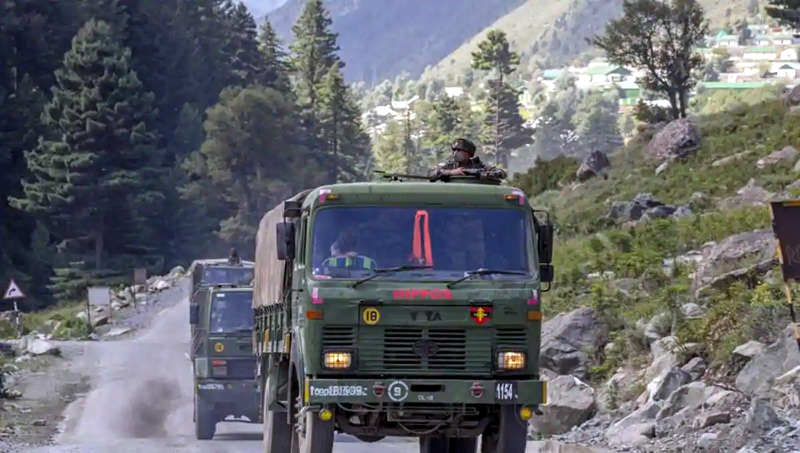 NEW DELHI, Sept 18:
The Government today carried out a comprehensive review of the overall situation in Eastern Ladakh including India’s operational preparedness in view of the continued belligerence by the Chinese Army and its fresh attempts to “intimidate” Indian troops in the region, Government sources said.
At a nearly 90-minute meeting of the high-power China Study Group, Defence Minister Rajnath Singh, National Security Advisor Ajit Doval, Chief of Defence Staff Gen. Bipin Rawat and the three service chiefs also looked at further enhancing the vigil along the nearly 3,500-km-long Line of Actual Control (LAC), including in Arunachal Pradesh and Sikkim sectors, they said.
Army chief Gen. M M Naravane briefed the meeting about the fresh face-offs between Indian and Chinese troops at both the North and South Bank of the Pangong lake and elaborated on steps taken to effectively deal with such attempts, the sources said.
“The meeting of the China Study Group reviewed all aspects of the situation,” said a source.
The meeting also deliberated on arrangements being made to maintain the current level of troops and weapons in all forward areas in Eastern Ladakh and other sensitive high-altitude sectors in the harsh winter months when the temperature drops up to minus 25 degree Celsius.
The sources said the meeting also briefly touched upon the main talking points to be raised by the Indian side at the next Corps Commander-level talks which is expected to focus on the implementation of an agreement reached between foreign ministers of India and China at a meeting in Moscow on September 10.
“We will insist on early and complete disengagement of Chinese troops from all friction points. That is the first step for restoration of peace and tranquillity along the border,” said a source.
The sources said the Chinese People’s Liberation Army(PLA) is yet to respond to the Indian Army’s communication to it on holding the next round of the Corps Commander-level talks.
“There is no date as of now as the Chinese military is yet to respond to it. The talks could take place sometime next week,” a source said.
The two sides have so far held five rounds of talks at the level of Corps Commanders.
The sources said the situation remained tense at both the North and South Bank of the Pangong lake area as well as at other friction points in Eastern Ladakh.
There have been at least three attempts by the PLA to “intimidate” Indian troops along the North and South Bank of Pangong lake area in the last three weeks where even shots were fired in the air for the first time at the LAC in 45 years. (PTI)