Excelsior Correspondent
KATRA, Dec 14: Ramesh Kumar, Chief Executive Officer, Shri Mata Vaishno Devi Shrine Board today inspected ongoing major development works and facilities for the pilgrims from Darshani Deodi to Bhawan.
The arrangements included water and power supply, clearance of snow in the Bhawan area, medicare facilities, sanitation and cleanliness, etc.
At Darshani Deodi, the CEO reviewed the queue management system and other facilities put in place for smooth movement and facilitation of pilgrims. On Tarakote Marg, he inspected the ongoing work on the underground cabling project. This underground cabling project, from Katra to Bhawan and the surrounding areas, which already stands allotted to a company by the Power Development Department of J&K Government, will take 24 months for completion. Estimated to cost Rs 78 crore, the project will be partly funded under the PMDP and partly by the Shrine Board.
Accompanied by Hem Kant Prasher, Chief Accounts Officer; Deepak Dubey and Dr Jadish Mehra, Dy CEOs; and other concerned officers and engineers of the Board, the CEO also inspected the free Langar being run by the Board for the pilgrims at Tarakote.
During his visit to Adhkuwari Complex, the CEO inspected the Bhojanalaya, medicare facilities, 4-storey earthquake resistant Toilet Block having modern facilities, the centralised 400 KLD Sewage Treatment Plant and various other arrangements for the pilgrims. At Himkoti, he undertook inspection of the Bhojanalaya and Medical Unit.
In the Bhawan area, the CEO extensively reviewed all the pilgrim-centric facilities with the accompanying team of officers, Naresh Kumar, SDM Bhawan and other concerned officers. These included in regard to snow clearance, Bhojanalayas, medicare, water and power supply, sanitation and cleanliness, etc.
Referring to the New Year rush of pilgrims which is witnessed every year from 20th December onwards, the CEO directed all the officers to ensure that all the required arrangements are put in place well in time for facilitating the expected rush of pilgrims. The arrangements include ensuring proper water and power supply along the track leading to the Shrine and in the Bhawan area, medicare facilities, adequate stocks of blankets, security, sanitation etc. He also reviewed the special arrangements which have been made enroute the Shrine of sagris (fire pots) and lukewarm drinking water for the pilgrims during the winter season.
During the visit, the CEO interacted with the pilgrims and enquired about the arrangements made by the Shrine Board to facilitate them. 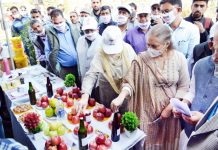