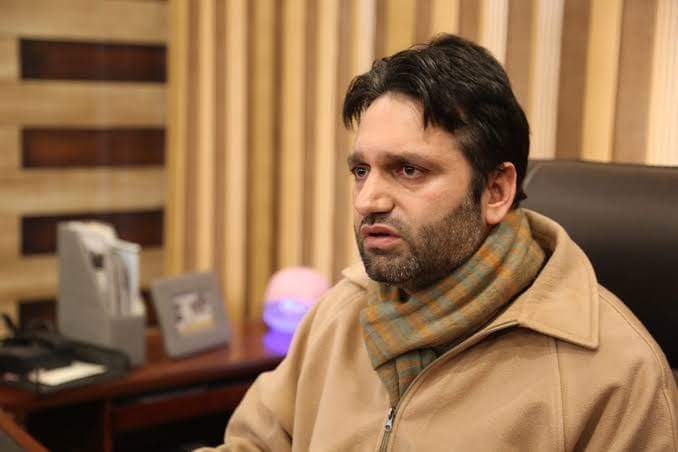 Complaint registered against Imran, phone recovered
Fayaz Bukhari
Srinagar, Dec 14: As the Bhartiya Janta Party (BJP) is gearing up for the coup at Srinagar Municipal Corporation (SMC) against Mayor of Srinagar city, Junaid Azim Mattu, and Deputy Mayor Sheikh Imran, a Corporator today lodged a complaint with police alleging that Deputy Mayor has threatened him.
An independent Corporator from Lal Chowk, Wajahat, who was close to Deputy Mayor of Srinagar city has reportedly switched sides and has come close to BJP. Imran who is under detention in sub-jail at MLAs’ hostel in Srinagar has allegedly called the Corporator from his cell number 9596422222 when he was attending a meeting at BJP office in Jawahar Nagar. He allegedly threatened Wajahat of dire consequences for supporting the BJP.
The Corporator has lodged a complaint with Police Station Rajbagh in Srinagar in which he has stated that Imran threatened him of dire consequences for his proximity to BJP. However, sources said that police was yet to register an FIR against Imran.
Wajahat told Excelsior that he lodged a complaint with Rajbagh Police Station after Imran threatened him on phone from sub-jail.
Sources said that soon after Police Station Rajbagh raised the issue with the police higher ups, an officer from the security wing of the police met Imran and asked him to surrender his cell phone. Imran handed over the phone to him from which he had allegedly called and threatened Wajahat. Last month, Police raided MLAs’ hostel and recovered 11 cell phones from the detainees.
Sources said that police is looking into the call details of Imran and are investigating into the threatening call he made to Wajahat.
It may me mentioned here that the BJP is planning to move no confidence motion against Juniad Mattu and Imran with the help of Independent Corporators and those belonging to National Conference and People’s Conference.
The BJP State General Secretary Ashok Kaul last month held a series of meetings with these Corporators at his Jawahar Nagar, Srinagar official residence. This was followed by meetings of these Corporators this week with senior BJP leader Sunil Kumar Sharma.
After assurances by these Corporators, senior BJP leaders are meeting Chief Secretary, BVR Subramanyam, at Jammu on the issue. They will ask for meeting of the SMC Council for vote of no-confidence against Mattu and Sheikh.
The names which are coming forward for the posts of Mayor and Deputy Mayor are Arif Raja and Nazir Ahmad Gilkar respectively. Raja is Corporator from Eidgah Ward of Srinagar and is one of the oldest workers of the BJP.
There are 70 Corporators in Srinagar with BJP having only 4. Congress is leading the tally with 17 Corporators, PC has 15, NC 11 and there are 23 Independents.
Mattu was elected as Srinagar Mayor on November 6, 2018 with the support of BJP. He had got 40 votes. Earlier, he had resigned from the primary membership of the NC in September last year after the party decided not to contest the Urban Local Body polls.
Mattu contested the SMC election as Independent from four wards, winning from three of them and was announced as the Mayoral candidate by Peoples Conference chairman Sajad Gani Lone hours after the election results were declared on October 20.