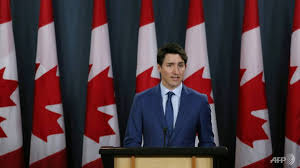 OTTAWA, Mar 19: Canadian Prime Minister Justin Trudeau has slammed leaders’ unwillingness to call out hate, while parliament unanimously passed a motion to stand against white supremacy in the wake of the Christchurch mosques attack.

“I stand here today to cast a light on this hatred and on our unwillingness to call it out,” Trudeau said in the House of Commons Monday.

“As leaders, as (a) privileged few with power and an audience, we have a responsibility to do something.” Trudeau said allowing bigotry in party politics, online, at town halls and “when it reaches our front door” amounted to nothing more than complicity and cowardice.

“I’m calling on like-minded countries of the world to stand with Canada in this fight. Muslims, Christians, Jews, black, white, all of us, we must fight this hatred as a team.”

The prime minister’s comments come amid a heated debate over religious and racial bigotry in the neighbouring US that saw President Donald Trump berated over his tepid response to the New Zealand massacre.

After the attack on two mosques in Christchurch on Friday, which left 50 dead and 50 injured, Trump voiced sympathy and solidarity with the victims and people of New Zealand.

The alleged gunman — identified as an Australian white nationalist — referred to Trump as “a symbol of renewed white identity and common purpose.” But in comments to reporters in the Oval Office, Trump dismissed concerns that white nationalism represented a growing danger around the world.

“I don’t really. I think it’s a small group of people that have very, very serious problems, I guess,” Trump said.

The Quebec City mosque shooter, who killed six worshippers in 2017, had scoured Twitter for Trump, right-wing commentators and alt-right figures before the attack. (AGENCIES)