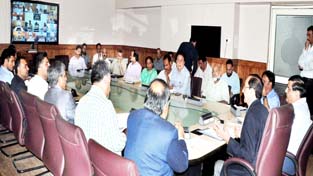 Excelsior Correspondent
SRINAGAR, June 1: Cabinet Secretary, Pradeep Kumar Sinha today chaired a video conference with concerned Union Secretaries, Chief Secretaries of States and DCs of the 117 ‘Aspirational Districts’ across the country to review the preparations for implementation of the ‘Extended Gram Swaraj Abhiyan’ (EGSA).
Chief Secretary, B B Vyas, Principal Secretary Health & Medical Education, Secretary, Rural Development and DCs of two ‘Aspirational Districts’ of J&K viz Baramulla & Kupwara also participated in the meeting.
As part of massive pro-poor initiative, Union Government which earlier launched the Gram Swaraj Abhiyan on April 14, 2018 across the country has decided to extend the programme to about 45000 villages with more than 1000 population in 117 ‘Aspirational Districts’ in the country including Baramulla and Kupwara of Jammu and Kashmir.
As many as 279 villages in district Baramulla and 222 villages in district Kupwara with population more than 1000 have been identified for special intervention under the programme, starting 1st of June, 2018.
The programme aims to achieve 100% saturation coverage in these 117 ‘Aspirational Districts’ under the 7 flagship programmes by 15th of August, 2018 viz PM Ujjwala Yojana, PM Sahaj Bijli Har Ghar Yojana, Ujala Scheme, PM Jan-Dhan Yojana, PM Jeevan-Jyoti Bima Yojana and PM Suraksha Bima Yojana.
While appreciating the efforts of the States in the successful implementation of the programme, Cabinet Secretary urged the States to work with the central teams and play a proactive role in bringing visible impact in these districts under the programme.