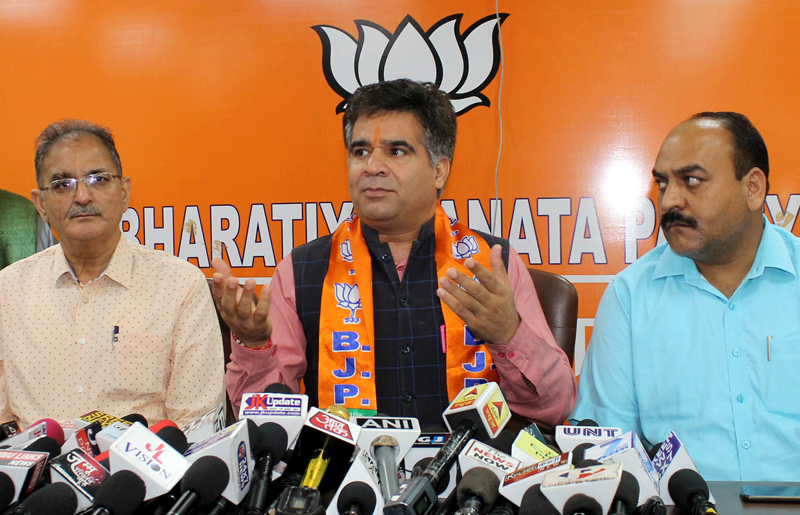 JAMMU, Oct 10: State Bharatiya Janata Party President, Ravinder Raina today alleged that Congress party was carrying forward the agenda of Pakistan through its BDC poll boycott call.
While addressing media persons at the party headquarter, here today, he also stressed that registration of Congress party be cancelled with immediate effect for its repeated acts to weaken the institutions of democracy.

Click here to watch video
Mr Raina alleged that Congress party does everything here, which is required as per the destructive foreign policy of rogue State of Pakistan. “Pakistan wants the election to be boycotted here, which is being implemented by Congress party along with NC and PDP in India,” he said and alleged that the Congress party has carried forward the agenda put forth by Hurriyat, separatists, and the enemies of the Nation through its actions and hence proved itself to be a traitor by bringing bad name to the Nation.
The BJP president said that Prime Minister Narendra Modi led Union Government and Election Commission of India (ECI) took essential steps for the strengthening of grass root level democracy in the Nation by empowering the Panchayati Raj system but Congress along with NC and PDP are busy in complying with the boycott agenda given by Pakistan. He said that a political party has the prime responsibility to contest the elections to represent the masses but as it fails to do so, ECI must take essential steps to disaffiliate the party.
“It is very unfortunate that for the last 70 years, masses were denied the power of democracy by either negating the Sarpanch, Panch polls or blocking their works by limiting their powers,” he said adding that through the BDC elections, Sarpanchs and the Panchs are being empowered to develop their areas according to the latest requirements and needs of masses.
Maintaining that BJP will contest the elections with full might, Mr Raina said that it was duty of every party to follow the guidelines given by the ECI as a registered political party. Congress, NC and PDP have betrayed country, democracy, Sarpanchs, Panchs and general public of Jammu, Kashmir and Ladakh by giving this boycott call,” he said and further alleged that the Congress party was never willing to give powers to the grass root level in the past and even today.
Ravinder Raina, was accompanied by former Dy Chief Minister Kavinder Gupta and State Incharge BJP’s All Morchas & State Co-Incharge BJP’s organizational elections Munish Sharma.