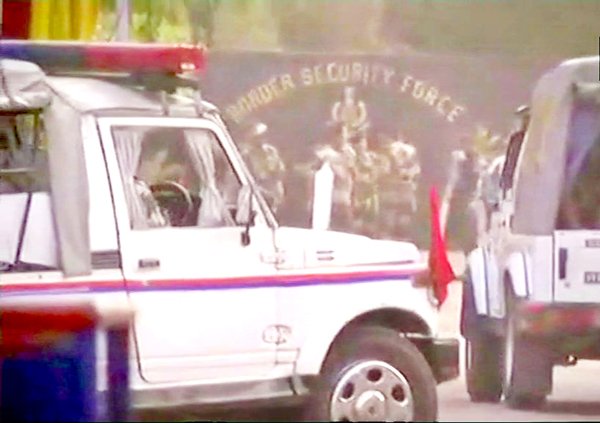 Sanjeev Pargal
JAMMU, June 4: The BSF last night carried out nine major strikes targeting Pakistani posts and bunkers on the International Border (IB) in Akhnoor sector blasting their 10 bunkers and posts in which at least five Rangers were reported to have been killed and three others injured prompting the Rangers to call for Sector Commanders-level flag meeting this evening at Octroi Post in Suchetgarh sector of RS Pura tehsil in which the two sides agreed for “firing-free environment’’, particularly for border areas’ villagers on both sides and decided to keep talks at every level to develop confidence between the two border guarding forces.

Click here to watch video
Sources told the Excelsior that that BSF retaliated Pakistan shelling and firing in both Akhnoor and Kanachak sectors to silence the guns of Rangers, which were raining mortars and bullets on the forward BSF posts and civilian population in the twin areas, leading to martyrdom of two BSF soldiers and injuries to 15 civilians and a police personnel.
The BSF, according to sources, carried out nine major strikes against the Rangers across Akhnoor and Kanachak sectors, decimating 10 bunkers and posts of Pakistan in which their five Rangers were reported to have been killed and three others injured.
“The retaliatory action against the Rangers was necessitated as they continued to target BSF posts and civilian population in nearly 31 villages spread over Kanachak and Akhnoor sectors, leading to panic among the border dwellers,’’ sources said, adding that the prompt action led to extensive damage on the Pakistani side.
Heavy mortar shelling and firing from Pakistan side stopped at 2 am early today after befitting retaliation by the BSF jawans that led to heavy casualties and damages on the Pakistani side.
There were confirmed reports that 10 Pakistani posts and bunkers, which were being used by the Rangers to target BSF posts and civilian areas were destroyed in the retaliatory firing by security forces. There were reports that at least five Pakistani Rangers were killed inside the bunkers and three others injured.
Security forces could easily watch the heavy movement of ambulances on Pakistani side to shift dead and injured Rangers.
After suffering casualties and damages, the Pakistani Rangers approached the BSF for Sector Commander-level flag meeting at Octroi Post in Suchetgarh sector of RS Pura tehsil at 5.30 pm today.
After the meeting that lasted about 40 minutes opposite Octroi Post, the BSF issued an official handout which stated that the meeting was held in conducive atmosphere with prime focus to maintain peace and tranquility on the borders.
“Today’s meeting is likely to bring firing-free environment, particularly for border area villagers on both sides,’’ the official BSF statement issued after the meeting said.
It added that the Commanders on both sides agreed to keep talks on at every level to develop confidence between the two border guarding forces i.e. the BSF and Rangers.
On May 29, the Director Generals of Military Operations (DGMOs) of India and Pakistan had spoken on hotline and decided to stick to 2003 ceasefire agreement of India and Pakistan. However, within six days of the hotline contact, Pakistani Rangers had violated ceasefire in the wee hours of Sunday morning at Kanachak and Pargwal sectors resorting to heavy mortar shelling and firing in which two BSF jawans were martyred and 16 persons including 15 civilians and a police jawan were injured, forcing the BSF to retaliate.
Meanwhile, panic still prevailed among the villagers living along the International Border in Jammu, Samba and Kathua districts as the people were not ready to trust Pakistan’s yet another talk of peace made this evening in a meeting with the Rangers as they felt that Pakistan can’t be trusted.
“If Pakistan can violate the assurance given by not less than person but their DGMO, it can also defy any commitment made at today’s Sector Commanders-level meeting,’’ the people, living along the International Border, observed, when approached for comments.
Though there was no shelling or firing in Kanachak and Pargwal sectors after 2 am today, the people remained confined inside their houses or bunkers fearing that Pakistan could start shelling and firing anytime, putting their lives to risk.
Last month, two BSF jawans and 10 civilians were killed in Pakistan shelling and firing on the International Border, besides there was heavy damage to property. Pakistan had suffered much more damages than India.