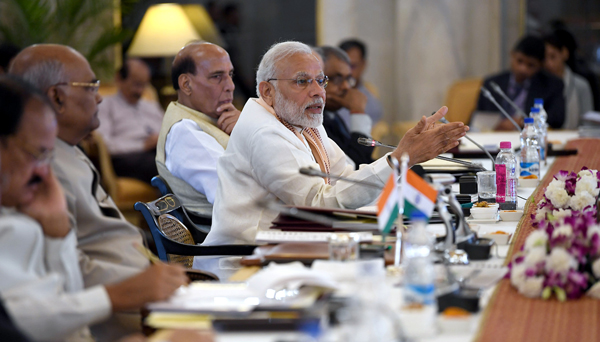 NEW DELHI, June 4: President Ram Nath Kovind today asked the Governors of States to act as change makers by improving the lives of marginalised people and enhancing higher education standards.
In his opening address at the two-day conference of Governors and Lt Governors, which began at the Rashtrapati Bhavan, he said a Governor is a mentor and guide for the State Government and an important link in the federal structure.
“The people of the State view the office of the governor and the Raj Bhavan as a fount of ideals and values,” Kovind said.
He said there are approximately 100 million people in the country who belong to the Scheduled Tribes.
“As Governors you can help in shaping of a road map for the betterment of lives of our fellow citizens, who have not benefited as much as expected from our development journey,” the President said.
He said India is blessed with the largest youth population in the world.
“As Governors, you are guardians of our youth – in the sense that you can inspire young people to absorb the right moral values and you can motivate them to both pursue modern education and remain sensitive to our Indian ethos,” Kovind said.
Talking about the higher education scenario in the country, the President said  69 per cent of total universities in India come under the purview of state governments and about 94 per cent of students enrolled for higher education study in these universities.
With Governors as Chancellors of most of these universities, Kovind said, they should provide the necessary impetus and inspiration to these institutions and enhance the level of scholarship.
“You can help and ensure that admissions of students and appointments of teachers in State universities are completed well in time and in a transparent manner. You can also help ensure that examinations, declaration of results and convocations take place as scheduled. It is for you to inspire State universities to maintain this discipline and integrity,” Kovind said.
The President said it is equally essential to keep the academic curriculum updated to maintain the contemporary relevance of education.
“As Governors of your States, it is for you to engage the youth and motivate them to use their academic achievements for the welfare of society and of our country. We need to strive collectively for a better life for our coming generations,” he said.
Kovind also sought suggestions from the Governors on celebrations for the 150th birth anniversary of Mahatma Gandhi. “There would be no better way to cherish his memory than to strive for genuine and meaningful social transformation,” he said.
The Centre has decided to commemorate the 150th birth anniversary of Mahatma Gandhi over a 24-month period commencing October 2, 2018.
“Gandhiji gave us an unfailing talisman. He said that to judge the efficacy of any action we contemplate, we should ask ourselves if it would be of help to the weakest, poorest and most disadvantaged person we know. We must keep this talisman in mind and I would welcome suggestions from all of you to put Gandhiji’s ideals and values into practice,” the President said.
Meanwhile, Prime Minister Narendra Modi today urged Governors to leverage their experience to help people derive maximum benefits from central schemes and reminded them of their pivotal role in a federal structure.
Addressing the opening session of the 49th Conference of Governors at Rashtrapati Bhavan, the Prime Minister said that in States with significant tribal population, they can help in ensuring that these communities take advantage of government initiatives in fields such as education, sports and financial inclusion.
He spoke at length about how governors could leverage their experience in different walks of life, so that people derive maximum benefit of various central development schemes and initiatives.
“The institution of Governor has a pivotal role to play within the federal structure and constitutional framework of our country,” Modi was quoted as saying in an official statement.
He said the tribal communities had played a key role in the freedom struggle, and this should be recognised and recorded for posterity through avenues such as digital museums.
Noting that Governors are also Chancellors of Universities, he said that International Yoga Day on June 21 can be utilised as an opportunity to generate greater awareness about yoga among the youth.
He emphasised that universities can also become the focal point of the celebrations for the 150th anniversary of Mahatma Gandhi.
The Prime Minister mentioned some key themes of development such as National Nutrition Mission, electrification of villages and development parameters in ‘aspirational districts’.
Modi suggested that Governors could also visit a few recently electrified villages to witness  first-hand the benefits of electrification.
He said that during the recent Gram Swaraj Abhiyan from April 14, seven key schemes of the Government were implemented fully in over 16,000 villages.
He said that these villages have been freed from seven problems through Jan Bhagidaari. Gram Swaraj Abhiyan is now being extended to 65,000 more villages, with a target date of August 15, he said.
The Prime Minister suggested that planning for the 50th Governors’ conference next year should begin immediately. This effort should focus on making this annual event even more productive, the statement said. (PTI)