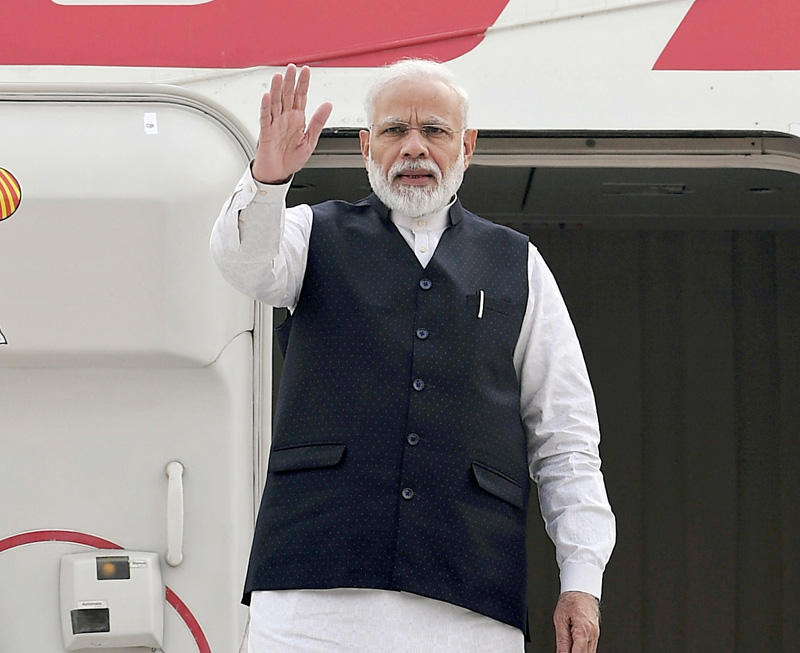 NEW DELHI, Nov 12: The BRICS summit will focus on strengthening ties among the world’s five major economies in key areas such as digital economy, science and technology, and also build mechanisms for counter terrorism cooperation, Prime Minister Narendra Modi said Tuesday.
Modi, who will be in Brazil on 13-14 November to attend the 11th BRICS Summit, said he will also meet Brazilian President Jair Bolsonaro to discuss ways to enhance the bilateral strategic partnership.
“I look forward to exchanging views with other BRICS leaders with the aim to further strengthen intra-BRICS cooperation particularly on the theme of the Summit ‘Economic growth for an innovative future’,” Prime Minister Modi said in his departure statement.
During the summit, the five major economies of the world will aim to significantly strengthen their cooperation in science, technology and innovation, he said.
The BRICS countries will also look to enhance cooperation on digital economy and build mechanisms for counter-terrorism cooperation within the BRICS framework, Modi said.
“Our business and industry play an important role in Intra-BRICS ties. I will be addressing BRICS Business Forum and interacting with BRICS Business Council and New Development Bank,” he said.
On the bilateral meeting with the Brazilian president, he said Brazil and India share close and ever expanding bilateral relations, including in the spheres of defence, security, trade, agriculture, energy and space.
Close cooperation between the two countries in multilateral forums has been a significant aspect of our strategic relationship, Modi said.
“BRICS Summit will also provide me with the opportunity to hold useful bilateral interactions with leaders of other BRICS countries,” he said.
This will be the sixth time Modi will be participating in the BRICS summit, his first being at Fortaleza, also in Brazil in 2014.
The prime minister is scheduled to hold separate bilateral meetings with Russian President Vladimir Putin and Chinese Premier Xi Jinping. He would also attend the BRICS business forum closing ceremony and the ‘closed’ and plenary sessions of the XI BRICS Summit.
In the closed session, the discussions are expected to be focused on challenges and opportunities for the exercise of national sovereignty in the contemporary world.
This will be followed by the BRICS Plenary Session, where the leaders will discuss the intra-BRICS cooperation for the economic development of BRICS societies.
A BRICS memorandum of understanding between trade and investment promotion agencies is expected to be signed. The participating leaders would also be issued on the conclusion of the summit, according to the Ministry of External Affairs.
BRICS is the acronym coined for an association of five major emerging national economies — Brazil, Russia, India, China and South Africa.
The grouping brings together five major emerging economies comprising 42 per cent of the world’s population, having 23 per cent of the global Gross Domestic Product. (PTI)