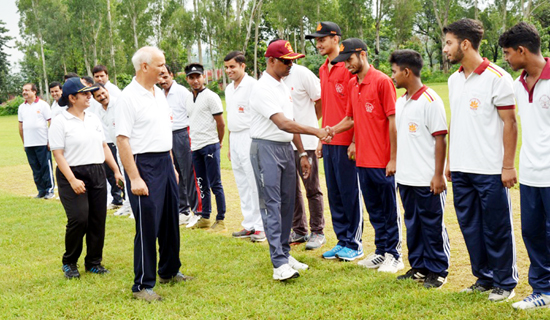 JAMMU, Aug 7: Former  Minister & MLA  Raipur-Domana, Bali Bhagat visited Ward No. 60, E.W.S Colony ( Roop Nagar ), Butta Nagar and Shiva Enclave and announced  two 100 KV transformers each for Shiva Enclave and Buta Nagar, Paloura out of his Constituency Development  Fund (CDF). He also announced Rs five  lakh for lane/drain and other works related to PHE for Butta Nagar, Paloura.
Speaking on the occasion, the former Minister said that BJP is committed to address the developmental needs of the people, for which a well-devised programme has been formulated. He further said that he believes in the work done and not on the hollow slogans, which was the buzz word of the previous regimes, who did nothing practically on ground. All the successive Governments befooled the people in the name of development and that is why even after seven decades of the independence, the State is lacking the basic facilities like “Bijli Pani and Sadak”, the former Minister asserted.
Bali was accompanied by officials of PHE & JMC along with Ex district president,  BJP (Rural) Sukhdev Singh Jamwal, Mandal Pradhan BJP, (Muthi-Paloura), Kuldeep Singh, (retd). Dy. SP HK Handoo, Suresh Khajuria, GL Bhagat, Sushma Manhas & BS Jasrotia.