E-Paper
Home personality An hour with a Scholar 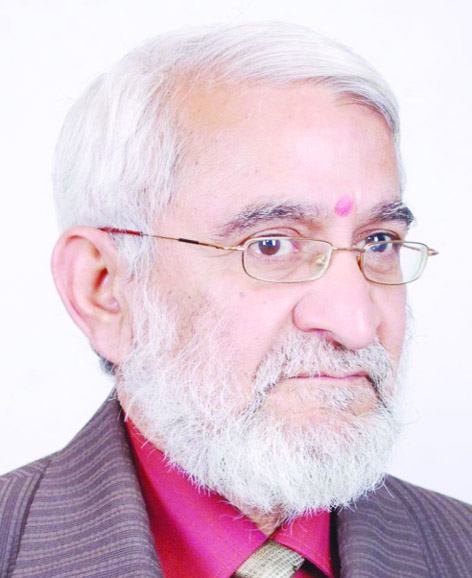 Suman K Sharma
He received me at the door of his austere house in Mohalla Pahadiyan of the old city of Jammu. Seating me comfortably, he asked with a warm smile, ‘kya lenge?’ I said a glass of lukewarm water would do.He returned after a longish span, carrying a large tray of peeled fruit and, of course, a glass tumbler filled with water to my liking. I sipped from the tumbler fitfully; eager to get past the courtesies and start a conversation.He insisted instead that I share with him the fruit first. Dr Om Goswami is like that -ever the genial scholar.
Savouring the ruby-red seeds of pomegranate, I told him how I had nearly missed his home among the bustling shop-fronts, even though I had visited him on an earlier occasion. ‘This place was a pell- mell of hillocks once,’ he said with his familiar sunny smile. ‘It was Maharaja Ranbir Singh who had it levelled for the construction of Shri Ranvireshwar Temple and the surrounds…’ Dr Goswami is a raconteur. He went on to relate the gradual transformation of the locality from the resting place of travellers to its present position of a trading hub. ‘In Maharaja’s times there used to be people appointed to keep an eye on the unruly elements.’ Our chat then veered to the Dogra heritage. ‘The geography of the Dogra region has given it a distinctive culture. I wish our people had taken care to preserve our heritage.’ He sighed. ‘There was that impoverished scion of an illustrious family who had to sell off dirt cheap a hoard of some four hundred and five paintings of historical value at hundred rupees a piece. And can you imagine how a dodger managed to rob our people of invaluable manuscripts? A short, stocky man from Poonch, he roamed from village to village carrying murmura in his bag. Engaging children playing in the lanes, he offered them the candy and asked in his sweet, avuncular manner which houses in the vicinity stashed handwritten old papers. The rest was simple. He visited those houses, talked the simple folks into parting with their heirlooms for paltry sums and then disposed of the manuscripts in Rishikesh at hefty margins.’
Dr Goswami,(born 1947), has held senior positions in the J&K Cultural Academy. He is essentially a man of literature, having authored several collections of short stories. In 1986,the Sahitya Akademi, New Delhi, awarded him for his short story collection, Sunne Di Chiree. He is better known for his thorough research work and acumen in literary criticism. I asked him what he felt about Dogri poetry. Goswami chose his words carefully while speaking of the contemporary poets. ‘We do have some poets today who are really good. But, there are many others who indulge in versification for the heck of it. I would like to reassert what I said long ago. Most of the Dogri poets today think that (1) a poem is a composition of phrases which should rhyme in the end and (2) poetry is a medium to attack social evils (Parampara Diyan Tandan – Strands of Tradition – Sheeraza Dogri, Dec 1978). No wonder then that their outpourings are amateurish, to say the least. Poetry is a serious calling. It needs wholehearted dedication, discipline, toil and more than the most, a finer sensibility than average. Dogri poetry has also had its golden period, when luminaries such as Deenubhai Pant, Lala Barkat Ram and Mohan Lal Sapolia waited for years on end to let a thought mature into a poem and go to the public with it. Those times are gone for good. Now everybody seems in a hurry to go to the press to have a book published.’ I could sense that Dr Goswami had said enough for the day. Reluctantly though, I took his leave.
As a parting gift, he gave me two books – a collection of his essays on criticism and his masterly treatise on Dogra folk-culture and their tradition of rituals, Dogra Lok-Sanskriti and Anushthan Pramapara. Walking back to the main road, I felt that the hour-long interaction with the unassuming author-thinker-scholar had enriched me in ways more than one.