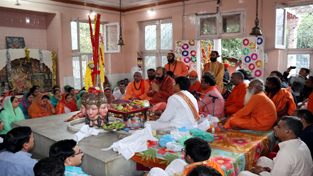 Excelsior Correspondent
JAMMU, Aug 16: After remaining suspended for three days due to security reasons, the Amarnath yatra resumed from Bhagwati Nagar Yatri Niwas here early this morning with 548 pilgrims leaving for twin base camps of  Baltal in Ganderbal district of Central Kashmir and Nunwan-Pahalgam in Anantnag district of Central Kashmir.
Giving this information a Officer on yatra duty said that the yatra resumed early this morning and a batch of 548 pilgrims left for twin base camps in Kashmir Valley under tight security measures early this morning. He said they will leave for the holy cave from their respective base camps early tomorrow morning.
He said on the 50th day of ongoing Swami Amarnath Yatra, 227 pilgrims performed darshan at holy cave today which  is situated at an altitude of 3880 meters above the sea level in deep Himalayas in South Kashmir district of Anantnag.
The Officer said till date 2,80,384 yatris performed darshan of naturally formed Ice Lingam at holy cave since the two month -long yatra started on June 28.
He said yatra is proceeding smoothly from both the tracks but the rush has declined considerably now.
Meanwhile, the Chhari Pujan was performed at the Amreshwar temple in Dashnami Akhara, Srinagar on the occasion of Nag Panchmi yesterday by Sadhus led by Mahant Deependra Giri, the sole custodian of holy mace and founder of True Trust. A large number of Sadhus and devotees participated in the function.
The two -month long yatra will culminate on Sawan Purnima coinciding with Raksha Bandhan festival falling on August 26 after the holy mace from DashnamiAkhara will reach the cave shrine.
The holy mace has been kept at the Dashnami Akhara Srinagar for the darshan of devotees up to August 20 and on that day it will leave for cave shrine to reach there in the wee hours of August 26.