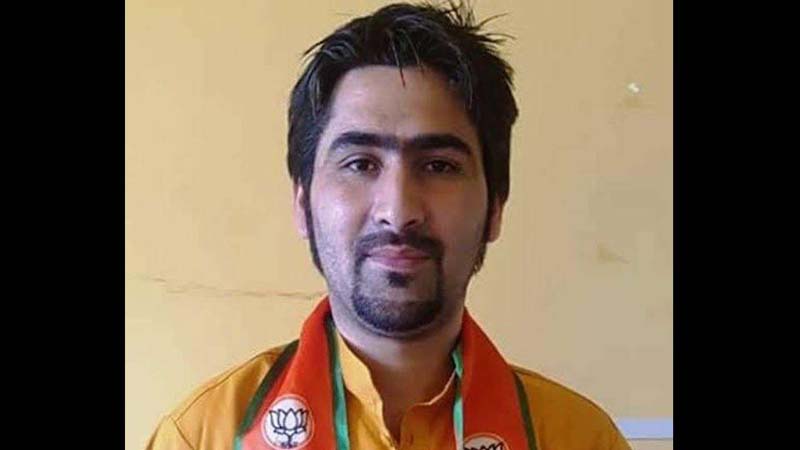 Excelsior Correspondent
SRINAGAR, July 9: Inspector General of Police, Vijay Kumar, today said that the killing of BJP leader along with father and brother was a pre-planned attack by the militants who have been identified. He said that all the 10 Personal Security Officers guarding the BJP leader have been arrested, suspended and would be terminated from service.

Click here to watch video
The BJP leader who was former district president of the party for Bandipora, Sheikh Wasim Bari, his father Bashir Ahmad and brother Umer Bashir were killed at their shop outside their house which is in vicinity to Police Station.
The IGP told reporters at Bandipora today that militants fired at them from very close range. “It seems to be a pre-planned attack. Yesterday, after Waseem returned (after visiting his in-laws), he had visited his home first and then his shop. The PSOs went to their rooms. When he visited the shop, there was his father and brother. One militant came and fired with pistol from close range,” he said.
He said that they have examined the CCTV footage at the Police Station which is opposite to the slain BJP leader’s house.
Kumar said that one of the militants is a local militant Abid and another is a Pakistani. “All three of them were hit in vital parts. They were taken to hospital and succumbed to injuries. We express grief. We have identified the militant. He is a member of Lashkar-e-Toiba. There is one Pakistani militant and one local militant namely Abid. Police and Army will very soon neutralize them,” he said.
Asked whether there was any security lapse, the police officer replied in negative. “After analyzing the CCTV at Police Station, there was no security lapse. Two personnel were from security wing and eight from district police. At the time of attack, there were eight personnel at his residence which is more than enough”, he added.
The IGP said that even two PSOs would have neutralized the militant. “There has been a mistake from our personnel for which action is being taken,” he said.
“SP sahib (local Superintendent of Police) has already suspended them and they are being dismissed from service. They are already under arrest.”
He said while one militant fired from the close range and other was guiding him from some distance. “As per CCTV footage, they came on foot”, he added.
The IG said that attack was pre-planned and militants would be neutralised soon. “As I already said, the attack was preplanned one. When he (Waseem) went to in-laws house and sit in his vehicle, one militant could be seen watching and when he returned he (the militant) is seen again. There is no need to worry and the militants will be neutralized soon”, he said.
Asked whether there will a review of the security of all the protected persons given the fact that the attack took place in a fortified area, Kumar said: “Whoever is having specific threat, they have been provided with security cover. He was also having the security. If any political worker, Sarpanch or Panch has any specific threat, they are requested to meet concerned SP and they will be provided security.”
Regarding use of any vehicle in the attack, he said that based on CCTV footage, “it does not seem that militants used any vehicle. They came by foot.”
When asked about need for increased security to protected persons, the IGP said: “See it does not matter whether there is increased or reduced security, what matters is how alert a security personnel is and how bravely he fights. Eight men are very enough.”