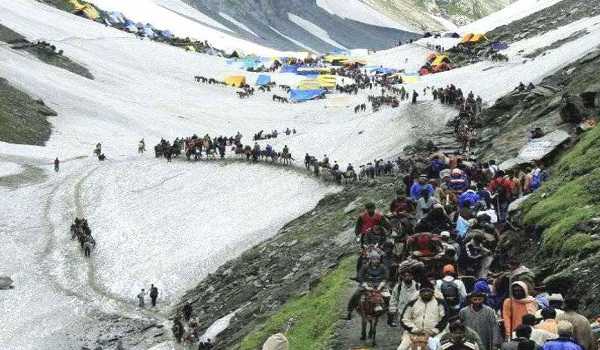 SRINAGAR: About 1,629 devotees paid obeisance at the holy Amarnath cave shrine in south Kashmir Himalayas on Sunday, when the yatra from base camps of Baltal and Nunwan Pahalgam was suspended due to slippery track following rain during the last 24 hours.

An official spokesperson said yatra remained suspended for the second day on Sunday from Baltal to holy cave because of slippery track. Yatra was also suspended on traditional Pahalgam track on Sunday due to rain and slippery conditions.

However, he said yatris, who had already undertaken the journey on Saturday through Pahalgam track, paid obeisance on Sunday. “On 28th day of the ongoing journey, about 1,629 pilgrims paid obeisance at the Holy Cave,” he said.

“Till date, about 3,19,355 lakh worshippers had the darshan of the self-made Shivling at the Holy Cave, which was highest since 2015,” he added. (AGENCIES)