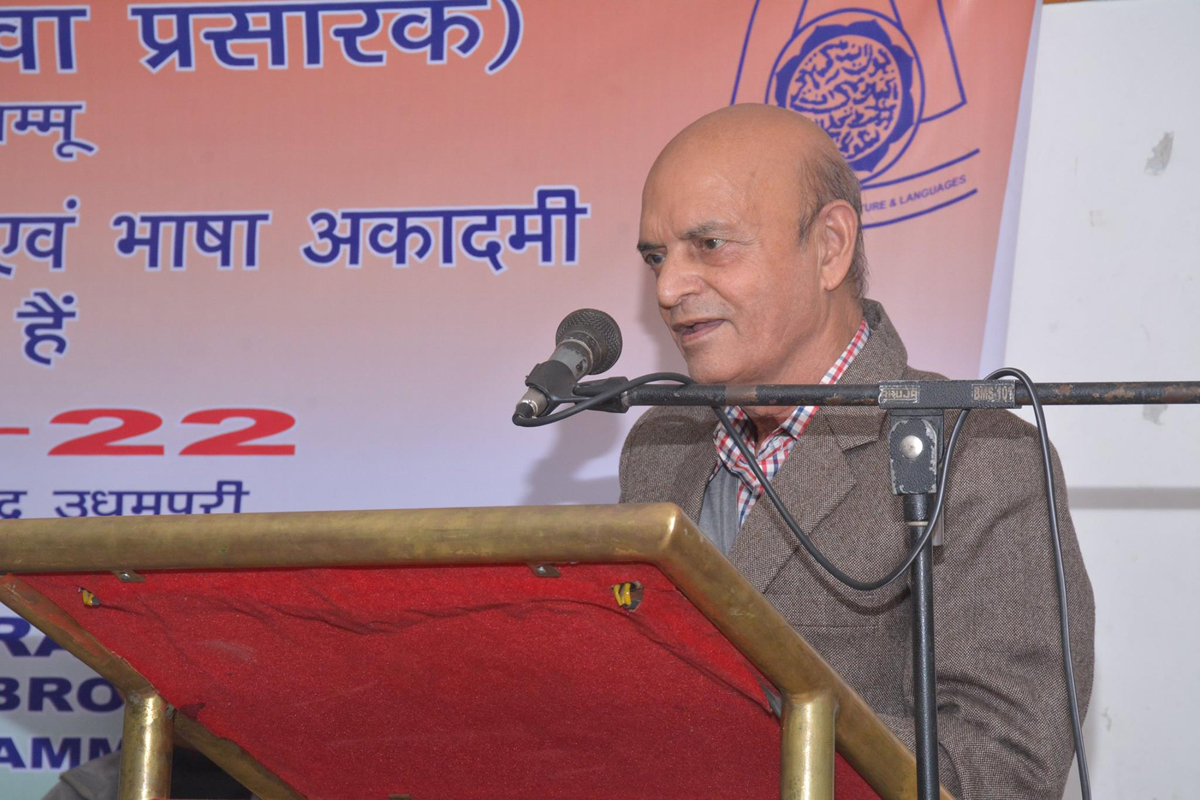 Rajeshwar Singh ‘Raju’
One thing that amuses me about the legendry figures of Dogri Literature is that when they started writing in mother tongue Dogri, they might not have even dreamed of that once this sweet language will get recognized constitutionally also by getting included in the 8th schedule. They were so talented that they could have opted any other language like Urdu, Hindi or English to excel in literary arena and carve a niche for themselves with broader prospects at that time. The fact remains that initially they did start with the language quite prominent at that time but soon shifted to mother tongue realizing that it was the best medium to express innovatively thus quenching their thirst for genuine expression. One of those legendry figures is Jitender Udhampuri, who has always believed that Work is worship and has proved it with magnificent contributions to treasure of Dogri Literature in particular.
Jitender , who retired as a Station Director All India Radio has been an eminent poet, writer, scholar and critic who has been serving mother tongue Dogri, Hindi , Punjabi ,Urdu for the last more than 50 years. He is never tired of giving words to his creative thoughts which get served in the form of poetry, songs, thought provoking write-ups and critical evaluations much to the delight of readers. Working with all dedication and devotion has been his basic instinct, quite evident from the caliber shown in academics as well. He is one of the most qualified persons from the state having passed M.A. in History, Urdu and Hindi, M. Ed Honours in Urdu, Hindi and Dogri, Post Graduation Diploma in Journalism and Mass Communication and Ph. D.
While he was in college, he got selected in Education Department but merely after 10 months of stint as a teacher, he got selected in JKAACL Jammu as Junior Editor in Dogri Dictionary Project. In 1970 he joined as a producer in All India Radio. Thereafter he never looked back and went on producing so many trend setter programmes for All India Radio which took radio to new heights.
However, while working in Audio Medium of expression, he went on for more innovations and experimentation in his creative pursuits. His collection of Dogri poetry _’Ek Shehar Yaaden Da’ is a perfect example of the direction that he had pursued at a young age. The captivating collection won him prestigious Sahitya Academy Award in 1981.
It needs to be mentioned here that initially he had started writing in Urdu and got encouraged with his poems being published in Pratap Daily, published from New Delhi at a very young age. But with the passage of time he switched over to Hindi and subsequently to mother tongue Dogri. While witting in own language, the expressions started showing real colors and it was not quite late that he started earning name and fame in literary circles. Now his creative works became talk of literary meetings.
He, besides being a celebrated Broadcaster has more than 30 books to his credit in Dogri, Hindi, Punjabi and Urdu Languages that cover different topics like history of Dogri Languages, History of Dogra Culture, The Great Epic ‘Jitto’, A Deewan of Ghazals, Duggar Nama, Geet Ganga, Thehra Hua Kohra, De Do Ek Vasant, Dil Darvesh aur Tanhayian etc. He has written more than 250 features on different themes, being broadcast from All India Radio. Some of his notable works have been translated into other languages like English, Hindi, Urdu, Kashmiri, Nepali and Czech etc. He is regarded as a trend setter in Dogri Poetry and has introduced several innovative themes and has experimented with new styles in his verses.
His remarkable services to Dogri and Hindi Languages and Dogri Culture have been recognized at State, National and even international level. He has been honoured by Government & Non-Government Organizations. It was his candid and valuable contribution to literature that he was conferred upon Padamshree, the fourth highest civilian award of Republic of India in 2010. The list of his achievements is quite long which conveys a lot about the profile of this prolific writer.
Jitender, hailing from Udhampur as is evident from his surname has never let his busy profession to overcome his passion. He has always managed to extract time for creative works that gave him a strange feel of ecstasy but he is not a content man at all. He has such a passion for writing that he wishes to have pen and paper with him till last breath so that he could pen down everything that haunts him creatively. He is never satisfied as he believes in continuous journey that should not halt at any point of time until the ultimate truth intervenes.
For the last so many years he has been serving mother tongue by working on different aspects of literature as well as guiding the youths in their literary pursuits. He has been a role model to many. The new entrants should learn the basic mantra from this legendary figure that_ Work is worship. We should not waste time in haste but time should be capitalized as per merit. Put in best of efforts and then feel more thirst for creativity as the stage of satisfaction is an “End” of journey for a creative person.