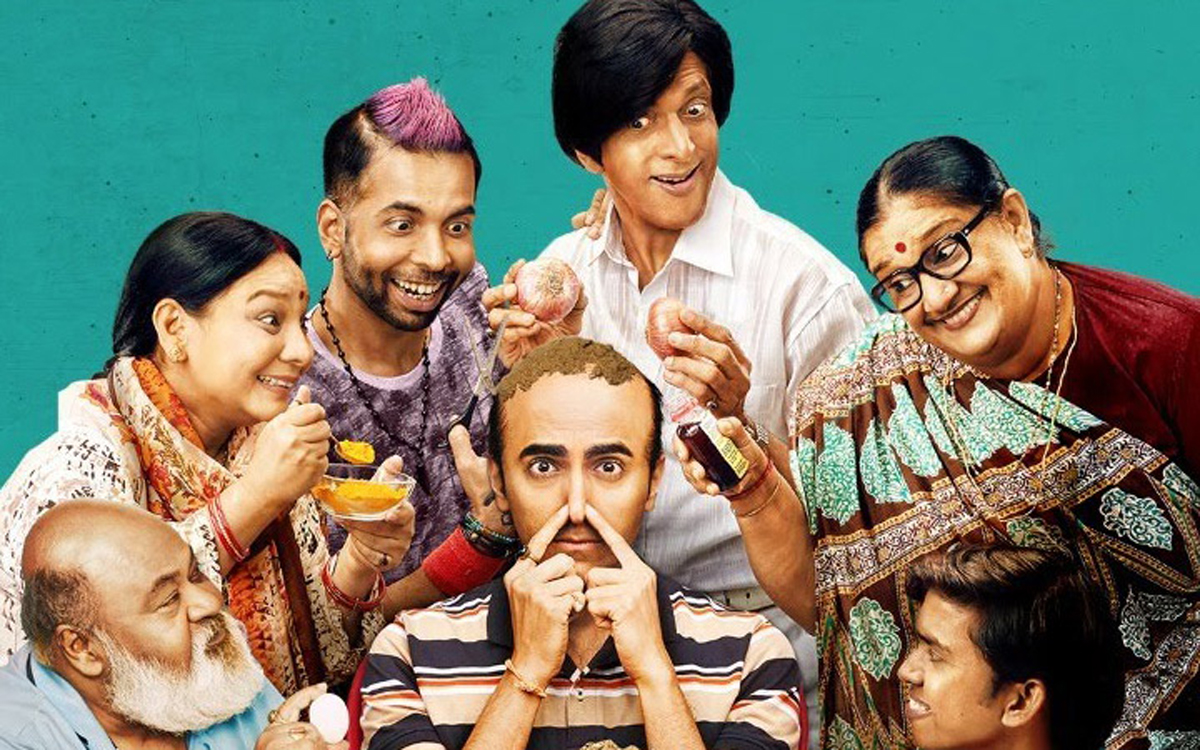 BALA is the story of accepting oneself despite imperfections. The year is 2005. Balmukund Shukla aka Bala (Sachin Chaudhary) is a child in Kanpur who is proud of his looks and hair. He is very popular in his school and has lot of female admirers. He is so obsessed with his looks that he even ridicules his classmate and neighbour Latika (Saniya Touqeer) over her dark complexion. The story then moves 11 years ahead. The year is 2016 and Bala (Ayushmann Khurrana) has suffered extreme premature balding. He works in the marketing team of a fairness product. Latika (Bhumi Pednekar) is a firebrand lawyer and both still can’t look eye to eye. Bala tries lot of techniques to grow his hair but nothing works. Hair transplant is an option but he can’t opt for it as he’s diabetic. With no other option in hand, Bala accepts his father Hari’s (Saurabh Shukla) suggestion and opts for a wig. He is then sent to Lucknow where his company is shooting for an ad with Pari Mishra (Yami Gautam). She is a popular TikTok star and Bala has a major crush on her. He meets her during the course of the shoot and woos her. In no time both fall in love and begin a romantic relationship. Realising that things are getting serious between them, Bala feels he should tell Pari that he is bald and that he wears a wig. However he is not able to especially when he realises that for Pari, external beauty matters the most. He fears that if he confesses to Pari, she’ll dump him. Their respective families meet and the marriage is fixed. What happens next forms the rest of the film.
Niren Bhatt’s story (original story by Pavel) is excellent and novel. There is a very nice message given by the makers. Niren Bhatt’s screenplay (with additional screenplay by Ravi Muppa) ensures that this message comes out in an entertaining way without getting preachy. Niren Bhatt’s dialogues are one of the highpoints. Some of the one-liners are very clever and take the film to dizzying heights.
Amar Kaushik’s direction is excellent and he proves that he knows his craft and that his debut directorial venture STREE [2018] was no fluke. The treatment of the film is very simple and adds a lot to the script. What’s praiseworthy is that he keeps the flow of the film very smooth and organic. There are scenes where the situation suddenly turns from comic to serious or vice versa. Yet, it’s done so well that it doesn’t seem unconvincing or out of place. Also, the finale is helmed nicely and not only families, but even youngsters and every cinegoer would love it.
BALA begins on a very entertaining note, showcasing Bala’s childhood. The interest is maintained as Bala grows up and viewers get acquainted with his family and professional life. The humour quotient is not much initially but it significantly increases in the scene where Bala tries 200+ remedies to get back his hair. Some of these solutions are literally ‘hair-rising’, thus raising laughs. Things get better when Bala meets Pari in Lucknow. Their romance blooms over a series of TikTok videos and it’s sure to be loved by viewers. While the first half has more of comedy, in the second half, the story takes a dramatic and serious turn. The interest level drops here but goes on a high once again in the climax. The finale is unconventional but works. Another sequence of the second half that deserves mention is when Ayushmann and his friend run away with newspaper copies. It’s sure to create a riot in theatres!
BALA belongs to Ayushmann Khurrana. He plays the part very naturally, as if he has been bald all his life. The character of Bala is very filmy who loves the 90s songs and the actor brings out this aspect in an entertaining manner. Also, he is too good in the dramatic and confrontational sequences. Bhumi Pednekar does seem a bit awkward initially but she essays her part with perfection and is a natural. She doesn’t have much to do in the first half but excels in the second hour. In fact, this can be counted as one of her most accomplished works. Yami Gautam also gets into the skin of her character and gives a credible performance. Notice how she has worked hard on her accent. In one of the most important scenes of the second half, she does so well that viewers are bound to clap loudly for her! Child actors Sachin Chaudhary and Saniya Touqeer are nice. Saurabh Shukla is dependable as always and he rocks in the scene where Bala apologizes to him. Dheerendra Gautam (Vihan) leaves a mark but his part reminds one of Shardul Rana, who played Ayushmann’s younger brother in BADHAAI HO [2018]. His outburst in the first half is very funny. Abhishek Banerjee (Ajju) is decent in the supporting part. Jaaved Jaaferi (Bachchan Pandey) is fine but gets limited scope. Seema Pahwa (Latika’s mausi) is adorable. Other actors who do well are Sunita Rajwar (Bala’s mother Manju), Umesh Shukla (Bala’s maternal grandfather), Sumit Arora (Bala’s boss), Yash Chaturvedi (Bala’s colleague Varun), Shashi Verma (hair transplant doctor) and Mushtaq Khan (lawyer Raina). Ayushmann’s brother Aparshakti Khurana is also there in a fun scene. Lastly, Vijay Raaz is the sutradhar of the film and surprisingly, he plays the part of ‘hair’! And it adds a nice touch to the film. At the box office, the film will surely benefit thanks to great word of mouth and brand Ayushmann. It will emerge as a profitable venture for the producers and will make its entry into the 100 crore club.
Courtesy : https://www.bollywoodhungama.com/