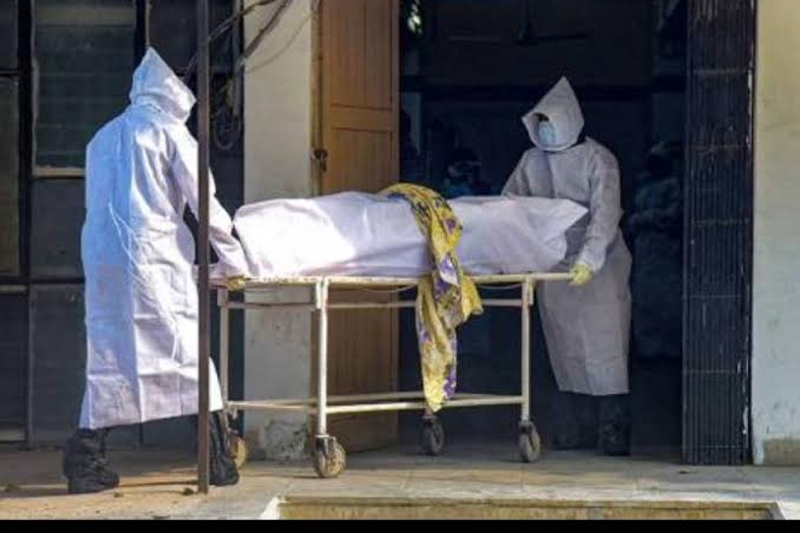 JAMMU, June 10: COVID deaths today again recorded surge in Jammu region with 17 persons succumbing to the virus including five women, one of them a female police constable and a youth while 332 persons tested positive.
This is after more than a fortnight that 17 fatalities related to Coronavirus have been recorded in Jammu region. However, significantly Doda and Ramban districts reported more positive cases than Jammu district.
DRDO Hospital Bhagwati Nagar reported first casualty but, according to GMC Jammu Principal Dr Shashi Sudhan Sharma, the patient hailing from Kunjwani wasn’t under treatment in the hospital but was brought dead there. The body was later shifted to the GMC Jammu for packing as per COVID protocol for cremation.
Among 17 casualties, five were women. Maximum eight COVID deaths were reported from Jammu district followed by three in Doda, two Rajouri and one each in Udhampur, Samba, Reasi and Poonch districts. In Jammu districts, four deaths were recorded at RS Pura-Bishnah belt and two in Trikuta Nagar.
A 49-year-old Selection Grade Constable (SGCT) posted in the District Police Line (DPL) Gandhi Nagar and a resident of Christian Colony Residency Road succumbed to COVID-19 and other ailments in the GMC Jammu.
A 23-year-old youth from village Phinter in RS Pura died of COVID Pneumonia in the GMC Jammu. He had no other ailments. Other casualties in RS Pura-Bishnah belt include 86-year-old man from Kir Pind, 82-year-old from Kotli Mian Fateh and 55-year-old of Bishnah. Two Corona fatalities which were reported from Trikuta Nagar were two men aged 55 and 74.
Three COVID deaths were reported from Doda district tonight including a 60-year-old woman from Bunjwah, 60-year-old female from Batote and 90-year-old man from Kastigarh. A 65-year-old woman from Housing Colony Phase-I Udhampur and 67-year-old female from Kalibari Samba succumbed to the virus in the GMC Jammu.
A 72-year-old man from Sunderbani and 87-year-old from Bajnowa Nowshera were the two casualties registered in Rajouri district.
Other deaths in the region include 62-year-old man from Azad Nagar near Jammu Airport, 65-year-iold man from Ward No. 10 Poonch and 55-year-old male from Kansipatta Reasi.
Meanwhile, for the first time since second wave of COVID broke out, Jammu district recorded less COVID cases than two other districts of the region including Doda and Ramban.
While Doda registered 56 cases and Ramban 51, Jammu reported 50 cases, the lowest during last about two months. Cases in other districts include Udhampur 47, Rajouri 44, Kishtwar 24, Poonch 22, Kathua 16 and Samba and Reasi 11 each.
Daily recoveries in Jammu region were more than double the positive cases today.
As against 332 fresh cases, 886 persons recovered from the virus, the maximum 371 in Jammu district, 161 in Ramban, 108 Rajouri, 72 Poonch, 50 Doda, 44 Kathua, 39 Udhampur, 22 Reasi, 14 Kishtwar and five in Samba district.
Fresh cases have taken Jammu region’s Corona count to 1,16, 254. Among them, 6949 are active positives while 1,07,292 have recovered from the virus and there have been 2017 casualties.
Maximum 1112 COVID deaths have so far been reported in Jammu district followed by 199 in Rajouri, 147 Kathua, 131 Udhampur, 116 Samba, 96 Doda, 81 Poonch, 57 Ramban, 40 Reasi and 38 in Kishtwar district.
Meanwhile, the Union Territory of Ladakh today reported 55 new COVID positives cases including 40 in Leh district and 15 in Kargil district. However, for third consecutive day, no COVID casualty has been reported in the UT of Ladakh keeping death toll static at 195—141 in Leh and 54 in Kargil.
Corona count in Ladakh has, however, gone up to 19385. Of them, 925 are active positives cases while 18265 have recovered.