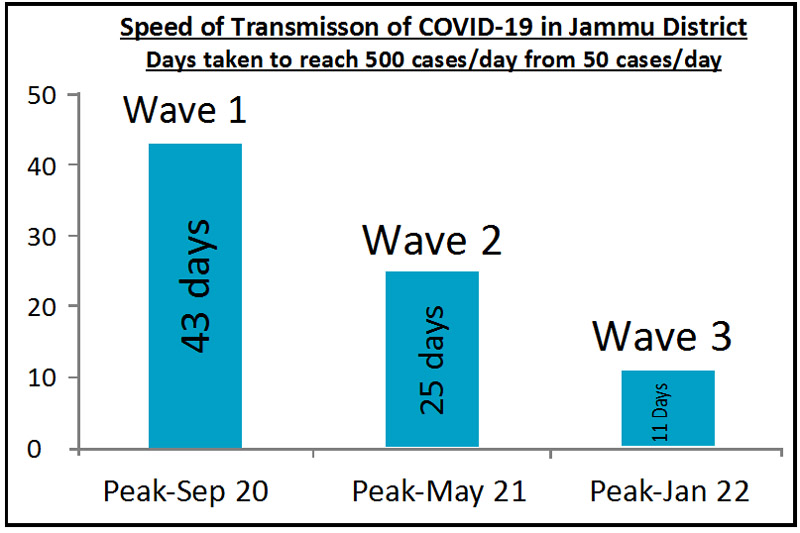 JAMMU, Jan 15: There has been no let up in surge in COVID positive cases in Jammu and Kashmir with 3251 new cases detected today while four persons succumbed to the viral infection. The UT of Ladakh continued to record 100 plus cases.
Two Corona casualties and 1129 cases were reported from Jammu division while Kashmir valley accounted for two fatalities and 2122 positives.
A 70-year-old partially vaccinated man hailing from village Phinter in Billawar tehsil of Kathua district died of COVID-19 and co-morbidities in the Government Medical College (GMC) Jammu today. Click here to watch video
Another 70-year-old unvaccinated man from Toph Paloura in Jammu district succumbed to the virus and multiple ailments in Narayana Hospital Katra.
Thirty six officials of Jammu and Kashmir Academy of Art, Culture and Languages (JKAACL) at Jammu, 31 more officials of Civil Secretariat including a female IAS officer, 14 more at IIT Jammu, 22 staffers and students of Mubarak Mandi Higher Secondary School, six at SOS Home, SHO and six cops at Police Station Domana, 17 officials at Horticulture Department, seven at Industries Department Bahu Plaza, three more CID personnel, three officials of Sheep Husbandry Department, three more at Raj Bhawan Jammu and two at Forest Department Dogra Hall today reported positive for COVID-19.
Twenty seven officials in the office of Deputy Commissioner Poonch also tested positive for COVID-19.
In an alarming situation, 40 villagers at Bassi Kalan in Samba district have been found infected during testing.
Nine pilgrims of Shri Mata Vaishno Devi Ji shrine have also been found positive for viral infection during testing at Katra Railway Station.
Among 1129 COVID positive cases in Jammu, 685 were reported from Jammu district alone followed by 125 in Udhampur, 93 Samba, 59 Kathua, 42 Reasi, 35 Poonch, 34 Rajouri, 29 Kishtwar, 24 Doda and three in Ramban district.
With 239 recoveries, the number of active positive cases in Jammu now stood at 5690.
Meanwhile, confusion prevailed over the Government order on weekend restrictions in Jammu region today. “Shops at some places were open and closed in other areas. “At few places, cops were seen asking the shopkeepers to down their shutters. “Transport was almost normal at most of the places.
Out of 106 fresh COVID positive cases in the UT of Ladakh, 86 were recorded in Leh district and 20 in Kargil.
Ladakh now has 669 active positive cases—603 in Leh and 66 in Kargil district.
Meanwhile, at least 42 doctors and paramedics of Government Medical College (GMC) Srinagar and its Associated Hospitals were among 2,122 people who tested positive for COVID-19 today.
At least 42 doctors and paramedics tested positive for COVID-19 today with officials saying that around 130 doctors and 120 paramedical staff from SMHS, LD hospital, Super Specialty Hospital Shireen Bagh and other associated hospitals tested positive for COVID-19 in the last 15 days.
He said that with more doctors and paramedics testing positive, “it is becoming a challenging situation to deal with the virus.”
Those who tested positive include 624 from Srinagar, 471 from Baramulla, 416 from Budgam, 67 from Pulwama, 137 from Kupwara, 228 from Anantnag, 117 from Bandipora, 21 from Ganderbal, 37 from Kulgam and 4 Shopian.
The number of cases in Kashmir division has reached 222,961 including 213,448 recoveries and 2,343 deaths.
The number of active cases in Jammu and Kashmir are 12,860 including 7,170 from Kashmir division.
With 390 more recoveries, the tally of total recoveries in Jammu and Kashmir has reached 338,453 which is 95.10 percent of the total cases.
In the meantime, administration in Kashmir today imposed restrictions on non-essential movement. The shops which opened in the morning in Srinagar and other places were forced to shut down by the administration. However, there was no restriction on the movement of traffic.