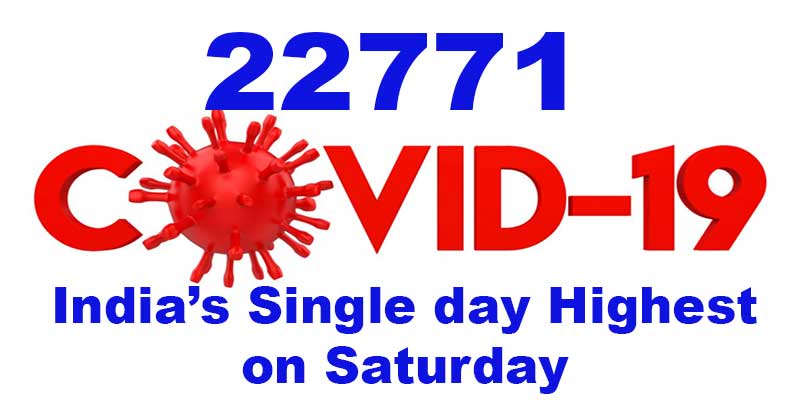 NEW DELHI, July 4: India’s COVID-19 tally neared 6.5 lakh cases today with a record single-day spike of 22,771 new infections, even as the recovery rate further improved to 60.81 per cent.
The Government said several people-centric measures taken as part of the “test, trace, treat” strategy have removed the impediments for COVID-19 testing.
Facilitation of widespread testing by States or Union Territories has spurred the number of samples tested every day, the Union Health Ministry said.
During the last 24 hours, 2,42,383 samples have been tested, pushing the cumulative number of tests to 95,40,132.
While the COVID-19 tally climbed to 6,48,315, the death toll rose to 18,655 with 442 new fatalities, according to Union Health Ministry data.
With a steady rise, the number of recoveries stands at 3,94,226 and one patient has migrated. There are 2,35,433 active cases of the novel coronavirus currently in the country, the updated data at 8 am showed.
“Thus, around 60.81 per cent of patients have recovered so far,” an official said.
The total number of confirmed cases also include foreigners.
This was the second consecutive day when coronavirus cases have increased by more than 20,000. There has been a surge of 4,57,780 COVID-19 cases from June 1 till date.
Of the 442 deaths reported in the last 24 hours, 198 are from Maharashtra, 64 from Tamil Nadu, 59 from Delhi, 21 from Karnataka, 18 each from Gujarat and West Bengal, 14 from Uttar Pradesh, 10 from Rajasthan, eight each from Andhra Pradesh and Telangana, five from Punjab, four each from Haryana and Madhya Pradesh, three from Bihar, and two each from Assam and Odisha.
Of the total 18,655 deaths reported so far, Maharashtra accounted for the highest 8,376 fatalities, followed by Delhi with 2,923 deaths, Gujarat with 1,904, Tamil Nadu with 1,385, Uttar Pradesh with 749, West Bengal with 717, Madhya Pradesh with 593, Rajasthan with 440 and Karnataka with 293 deaths.
The COVID-19 death toll reached 283 in Telangana, 255 in Haryana, 206 in Andhra Pradesh, 157 in Punjab, 80 in Bihar, 42 in Uttarakhand, 29 in Odisha and 25 in Kerala.
Jharkhand has registered 15 deaths, Chhattisgarh and Assam 14 each, Puducherry 12, Himachal Pradesh 10, Chandigarh six, Goa four and Meghalaya, Tripura and Arunachal Pradesh have reported one fatality each, according to the Health Ministry.
More than 70 per cent deaths took place due to comorbidities, it said. (PTI)