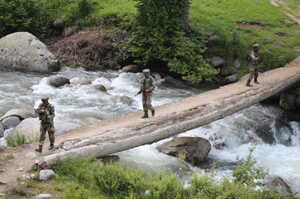 SRINAGAR, June 14: Two militants and a soldier were killed in an encounter in North Kashmir’s Bandipora district today while a soldier, who was abducted by militants in Shopian this morning, was later killed. Click here to watch video
The Army operation in which the two militants and soldier were killed was launched last week after security forces received information about presence of a militant group in the forests of Raynar.
A Defence spokesman said here that two militants and a soldier were killed in the operation so far. He said that the bodies of the militants were recovered along with as many AK rifles and other arms and ammunition. “Their identities and group affiliation is being ascertained”, he said.
One soldier was injured during the fresh gun battle and he was immediately evacuated to military hospital. However, he succumbed. He has been identified as Manvendra Singh of Uttarakhand.
The operation was launched last week when security forces received information about presence of a group of militants in Raynar forests adjacent to Panar area. An Army party was attacked by militants leading to a brief gun battle.
The operation with the help of additional reinforcement continued and entered on sixth straight day today. The troops of 14 RR , 22 RR,  27 RR, 18RR, 28RR, Marcose, Airforce Commandos and 31 Para and Police are conducting the joint operations in the forests against the group which is believed to be of 15 members out of which two were killed.
Security forces have recovered 2  AK-47 rifles, nine magazines, 180 AK rounds of ammunition, three hand granades, one GPS, one compass, two matrix sheet, one pouch, two mobile phones, two batteries, Rs 11, 000 Indian currency, two diaries, two caps and 18 empty catridges.
In the meantime, a soldier was abducted and killed in South Kashmir’s Pulwama  district today. Sources said that this morning at around 9 am Army men from 44 RR camp at Shadimarg, Pulwama stopped a private vehicle and asked the driver to drop the soldier in Shopian. When the vehicle reached near Kalampora, militants stopped the vehicle and abducted the soldier.
A joint team of Army’s 44 RR, SOG and CRPF cordoned off Drabgam village in a bid to find out the missing soldier, Aurangzeb, a resident of Poonch and posted at Shadimarg Army camp.
The soldier, believed to be very close to Major Shukla of 44 RR, who was injured in an encounter that saw the killing of the Hizb commander Sameer Tiger on April 30 this year, was abducted at Kalampora village of the district.
The soldier’s bullet riddled body was found in Gusoo Pulwama this evening.  Security forces are carrying out massive searches against his assailants.
And militants today attacked a paramilitary CRPF man and decamped with his service rifle in Qazigund area of South Kashmir’s Kulgam district.
Two persons on a motorbike attacked the CRPF man of 46 battalion with a stone near Sadoora Railway Station in Qazigund. After the attack, the persons managed to snatch his service rifle (INSAS) and fled from the spot.
The CRPF man was seriously injured in the incident and has been hospitalized. The entire area was cordoned off and searches have been launched to nab the attackers.
Meanwhile, at least four militants barged into the residential quarter of National Conference leader and district president, Ghulam Nabi Niloora at Niloora Pulwama tonight. They thrashed his brother Abdul Gani Wani and his nephew Ghulam Qadir Wani and also set ablaze the quarter.  The NC leader was not at the quarter and is presently putting up at MLA Hostel Pulwama.
Militants also barged into the house of SPO Sajad Ahmad Rather son of Hassan Rather of Niloora Pulwama and ransacked his house. The SPO is deployed with Ghulam Nabi Niloora.
Militants also entered into the house of Abdul Rashid Dar, father in law of police man Sheraz Ahmad Mir. They threatened and told him to ask Sheraz to leave the police job. Sheraz is posted in DPL Pulwama.