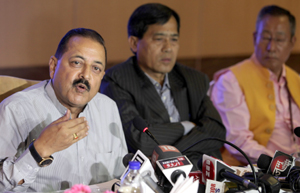 JAMMU, June 14: Allaying fears that Bharatiya Janata Party (BJP) led Government at Centre is soft pedalling on terrorism, Union Minister in PMO with independent charge of North Eastern States, Dr Jitendra Singh today asserted that terrorism will be crushed with iron hands. Click here to watch video
Talking to reporters here, along with MPs from NE States after the North East Consultative meeting here, Dr Jitendra Singh said that no one should construe that decision of suspending anti terrorist operations during the holy month of Ramzan as our weakness and made it clear that India is capable enough to crush the terrorists and their perpetrators with iron hands.
He said Modi Government has shown zero tolerance towards terrorism and there would be no appeasement towards them. He said Government especially the Ministry of Home Affairs is closely monitoring the situation in the State.
The terrorists can’t be spared at any cost but at the same time one can’t ignore those boys and girls of Kashmir, especially belonging to poor families who came with flying colours in combined, CBSE, PSU and other examinations from time to time.
Dr Jitendra Singh said that these children are availing avenues and they don’t want to lag behind the children of other States of country but want to stand along with them. He made it clear that the Modi Government is neither soft on terrorism nor towards Pakistan.
On repeated misadventures of Pakistan along border killing security forces jawans and civilians, the Union Minister said that there is also no leniency so far as dealing with Pakistan is concerned and our forces are giving befitting reply to every act. He said the heat of that has been felt across the border also and neighboring country is in great desperation.
On violation of Ramzan ceasefire by terrorists in Kashmir, Dr Jitendra Singh said if one is a pious Muslim he has to obey the holy Quran which has given a lot of significance to the fasting month of Ramzan. “It was not ceasefire but suspension of operation as a goodwill gesture shown by the Government during holy month of Ramzan.” He made it clear that there will be no compromise so far as security of the nation is concerned.
In response to a question whether ceasefire will continue further or not, he said the security agencies and MHA will review the situation on day to day basis and take decision accordingly.
Lambasting the separatists and so called ‘freedom fighters’, Dr Jitendra Singh said that they are doing lot of harm to Kashmir and Kashmiris. On taking offensive measures against terrorists and Pakistan, the Union Minister said that nothing binds the Government to safeguard the security in the larger national interests.
Maintaining that PM has restored the trust of people in the Government with his sincerity , Dr Jitendra Singh said the people of North Eastern States also reciprocated with the same gesture. The same kind of treatment has been given to people in other parts of country as well as J&K and he visited Kashmir to spend the first Diwali of his Government among the flood victims of the Valley, he added.
On calling Pak occupied Kashmir (PoK) as Azad Kashmir by United Nations recently, Dr Jitendra Singh said that there is a joint Indian Parliament resolution passed in 1994 that India reserves the right to liberate PoK which has been its part. Maintaining that Indian Parliament is supreme, he said every political party endorsed this resolution.
Earlier Dr Jitendra Singh convened a meeting of the Consultative Committee for Ministry of Development of North Eastern Region (DoNER) here. In addition to other issues discussed during the meeting, the main focus of the meeting revolved around issues related to North Eastern Handicrafts and Handloom Development Corporation (NEHHDC), livelihood schemes being implemented by the Ministry of Northeast (DoNER) and several innovative schemes initiated by the North Eastern Council (NEC).
Briefing the media, Dr Jitendra Singh said, one of the purposes of holding such consultative meetings about Northeast in different locations like Jammu is to enable the officials and elected representatives associated with the Committee to tell the rest of India, what all path-breaking and unique initiatives have been undertaken by the Modi Government for the development of Northeast in a brief span of just four years. While this enables the members of the Consultative Committee to acquaint themselves with developmental activities of the host State like Jammu & Kashmir, it is also an opportunity for the host State to pick up some valuable cues about the good practices put into effect by the DoNER Ministry in the Northeast.
Complimenting the colleagues in the Ministry of Northeast (DoNER) for all the cooperation in carrying forward all these innovative initiatives in the region, Dr Jitendra Singh said, the pace of developmental activity in the N E States today could serve as a cue and motivation for the other States of India, particularly the hill States like Jammu & Kashmir.
Dr Jitendra Singh said, soon after the Modi Government took over on 26th of May 2014, one of the earliest declarations made by Prime Minister, Narendra Modi was that he wanted to bring the peripheral States, like Northeast and Jammu & Kashmir at par with the other more developed States of the country. Looking back four years later, he said, this declaration stands adequately vindicated by the manner in which the whole world today is a witness to a revolutionary, fast-track development that Northeast has undergone in a brief period of three to four years.