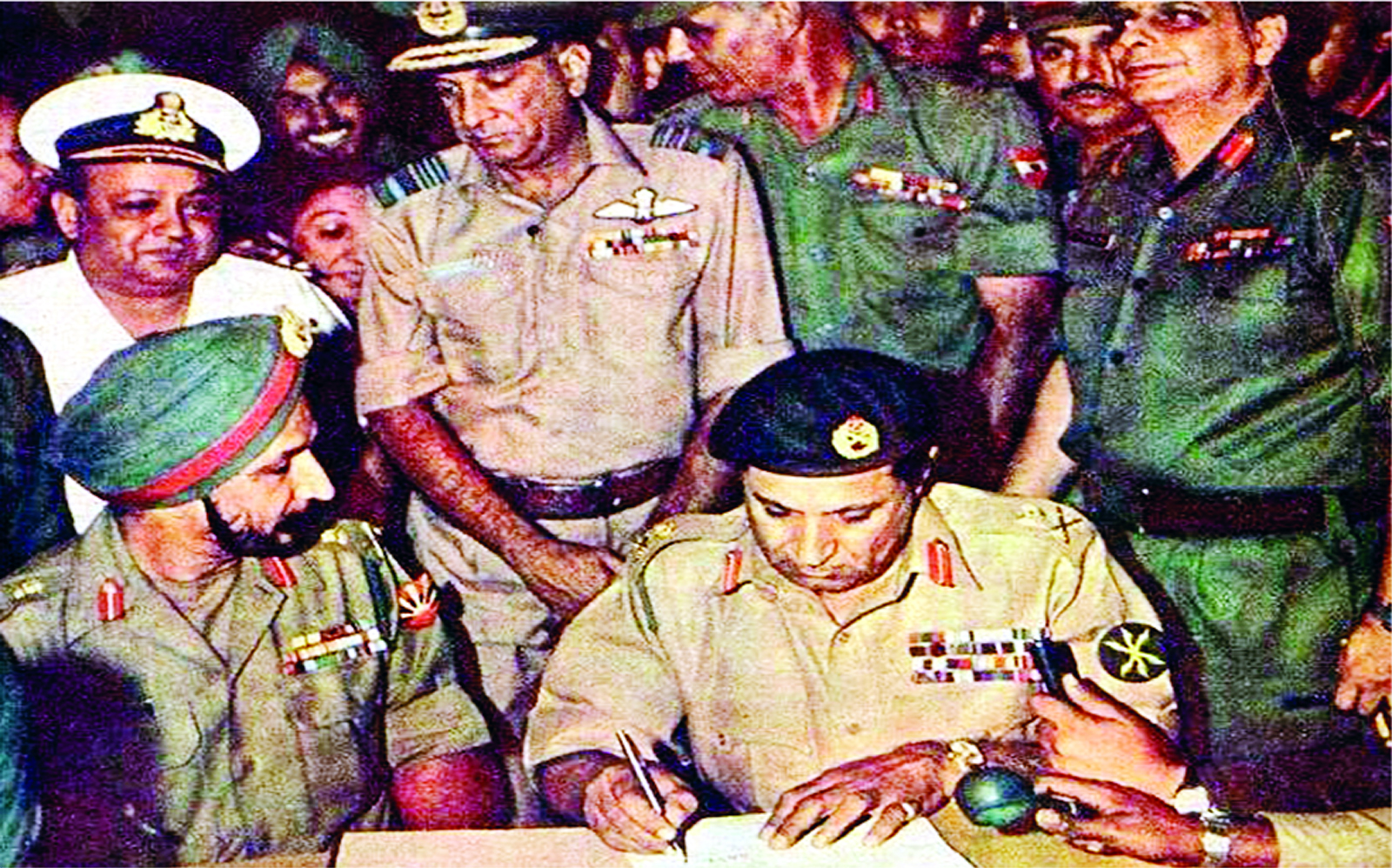 Puran Chand Sharma
Our wily neighbour Pakistan came into existence on Aug 14, 1947 when the Political Leadership of united India at that point of time was constrained to accept partition of the country in lieu of granting freedom. But despite getting separate Homeland they were never contented and instead persisted with hostile and inimical approach towards our country.
Soon after their birth they did not concentrate on stabilization and development but launched unprovoked armed assault on Jammu and Kashmir which was yet to take final call on accession with India and usurped major chunk of our territory. They did not stop here but relentlessly continued with their nasty mischief and ugly tricks. They resorted to pushing trained Guerrillas inside Kashmir to jeopardize our internal security and subsequently triggered armed invasion on the borders in 1965 which concluded with their crushing defeat.

However, even then they were not deterred and attacked India in 1971 which ultimately proved to be a rock solid deterrent and compelled them to change their war strategy from open war to a low intensity proxy war after humilating defeat succumbing to part with East Pakistan which was subsequently recognized as independent country Bangladesh on the global horizon.
This 1971 war was decisive in the sense that a sovereign country was ripped apart to create a new country by virtue of a well planned and daring military action despite teething opposition of most powerful Nation, USA. The task was really herculean and extremely challenging which could have never been accomplished sans dare devil Heroes who deserve our heartiest salutations, full measure of gratitude and emotional remembrance from the core of the heart in this month of December. It was not a long drawn war which broke out on Dec. 3 1971 as a sequel to pre-emptive Air strikes on 11 Air bases of India and lasted for only 13 days with unprecedented meek surrender by 90000 Pakistani soldiers. This was the largest surrender since world war- II. 3900 Indian soldiers were killed and 10000 injured , many with lifelong disabilities in this war. Let us move down the memory lane to register our remembrance with brief account of their action, in honour of our Heroes, the cynosure of 1971 war in the following paras :-
Flying officer Nirmal Jit Singh Shekhon was posted at Srinagar Airbase in 1971: The Airfeild was attacked by 6 Pakistani Sabre fighter aircrafts on Dec. 141971. Sekhon was on duty at that crucial moment. It was a lightning moment, a time of grave crisis and emergency. The young flying officer became air born in his GNAT air craft at the spur of moment and took on Pakistani fighter planes , shot one of them, meanwhile few more enemy aircrafts joined the combat. Shekhon fearlessly engaged the enemy in unequal combat holding his nerves but eventually he was overcome by the sheer weight of numbers. His plane crashed and dare devil Paramjit Singh Shekhon was killed in action while saving Srinagar Airfield. He was awarded Param Vir Chakar, the highest gallantry award in India. He is the only Air force officer to be honoured with PVC.
Major Kuldip Singh Chandpuri: Battle of Longowalla is the most significant chapter of 1971 war History. Major Kuldip was in command at this strategic post with only 100 soldiers. Pakistan Army contingent comprising 2000 soldiers with 40 Tanks were spotted advancing towards the post under the cover of darkness. Commander asked for Air support but he was told to wait till the dawn as in those days the Indian fighter planes were not equipped and programmed for night operations. Major Kuldip Singh exhibited exemplary courage, presence of mind, motivational skills, meticulous planning in the Battlefield and thwarted all their attempts during the night on 4th December, 1971 to cross over Longowalla post. He was bestowed Mahavir Chakra, the second highest Gallantry Award. He superannuated as Brigadier. Recently this year PM MODI visited Longowalla post and in his address to the Army he profusely acclaimed and extolled Major Kuldip Chandpuri’s valour and contribution. It was thrilling to see him in live action in Border film of actor, Sunny Deol in the year 1997.
Ian Cardozo:He was holding the rank of Major in 1971 war and posted with 4/5 Gorkha Rifles when the war got triggered. He was famous as Cartoos Sahib amongst Gorkha soldiers. After the Battallion’s 2nd in command was killed in action, Cordozo was ordered to replace him. He participated in first successful Heli born operation in the war. Subsequently he happened to step on a mine and gravely injured and developed Gangerene. Morphene and Medics were not available. Amputation of leg was the only option. Cardozo then used his own Khukri to amputate his leg and was later operated by a Pakistani Doctor caught in action. He earned the distinction of becoming first war disabled officer of Indian Army to command a Battallion and a Brigade. He retired as Major General.
Rameshwar Nath Kao was chief of Raw, India’s External Intelligence Agency: He is known as architect of Bangladesh. His team was given the name Kao boys’. He was working behind the scene. Raw helped Mukti Vahini and Bangladesh forces to get the better of West Pakistan Army by training 1 Lac East Pakistanis who led the country to freedom with the assistance of Indian Army under his able leadership. Though 1971 war was a military victory Lock, Stock and Barrel yet the RAW played a pivotal role in this war. Rao had a brilliant intelligence and analytical acumen. He is said to have told Indira Gandhi two years before to be ready for partition of Pakistan.
Sam Manekshaw, Army Chief: PM Indira Gandhi called him and told him to move the forces into East Pakistan but Army chief said, we need time and it was granted. 3 Brigades of Bangladeshi Army together with thousands of Guerrillas were trained to take on Pakistani Military. He was conferred the Rank of Field Marshal in 1973 and became the first Army officer to be honoured with this prestigious rank.
There are numerous other unsung Heroes who deserve our salutations and tributes on the Historic day of 16th December.