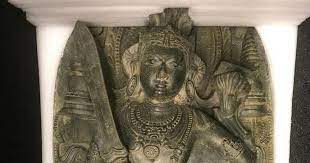 NEW YORK, Aug 9: A 12th century idol of Hindu goddess Parvati stolen in 1971 from a temple in Tamil Nadu has been traced to New York, police say.
It was found at the Bonhams Auction House. Bonhams is a privately owned international auction house which is headquartered in London, reports BBC.
A senior police official said the Tamil Nadu Police’s Idol Wing has readied papers to bring the idol back.
The idol was first reported missing from the Nadanapureshwarar Sivan temple in 1971.
Investigation began in 2019 after a temple trustee filed a police complaint. The investigation was led by the Idol Wing of the Tamil Nadu Police which traces missing artefacts.
The idol, which measures about 52 cm in height, was one among five idols missing from the temple.
Police said the idol was valued at $212,575. It shows the goddess in a standing position, wearing a crown of rings kept atop each other, the report said.
The patterns in the crown are repeated in the necklaces, armbands, girdle and garment, embellishing the bronze texture, the police description said.
“The sculpture is a testament to the technical genius of the artist, epitomizing the confident and time-honoured aesthetic canon of the Chola empire,” the Idol Wing said in a statement. The Chola empire ruled last parts of southern India from the 10th to the 13th century.
Police sought the opinion of an expert to compare a photograph of the idol with the one on sale at Bonhams Auction House.
“Therefore, we are entitled to claim ownership of the idol as India is a party to UNESCO’S World Heritage Convention, 1972,” the police said.
Over the past few years, India has amplified efforts to bring back idols and other artefacts which were stolen or smuggled from temples.
In February, Prime Minister Narendra Modi said that “more than 200 precious idols” have been successfully brought back to India since 2014.
(UNI)