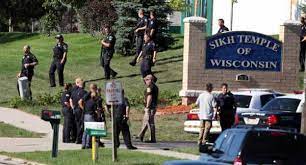 Washington, Aug 9: A top US Government official participated in the candlelight remembrance vigil last week to mark the 10th anniversary of the attack on a gurdwara in Wisconsin, the US State Department said on Monday.
On August 5, 2012, a white supremacist opened fire inside the Oak Creek gurdwara in Winconsin, killing six people.
A seventh person who was severely paralysed, died from his injuries in 2020.
US Ambassador at Large for International Religious Freedom Rashad Hussain travelled to Oak Creek, Wisconsin to participate in the 10th anniversary of the incident, the US State Department said.
“The event convened federal and state government representatives, civil society, and religious leaders to honour the victims of the 2012 attack and to stand in solidarity with the Sikh community,” it said.
During his visit to Wisconsin on August 5 and 6, Hussain met with community leaders and local government officials to discuss our continuing efforts to work together to combat hate and protect religious freedom and places of worship everywhere, the State Department added.
US President Joe Biden called for reducing gun violence and banning assault weapons in the US to defeat “domestic terrorism” and hate in all its forms, including the “poison of white supremacy”, as he condemned the attack on a Sikh gurdwara in Wisconsin on the 10th anniversary of the heinous act.
Biden said the Oak Creek incident has shown “us the way” and recalled how after the attack, the Sikh community returned to their gurdwara and insisted on cleaning it themselves.
The son of one of the victims became the first Sikh in American history to testify before Congress, successfully calling for the federal government to track hate crimes against Sikhs and other minority groups.
Every year, the congregation now hosts an annual memorial run to honour the victims.
The event bears the words ‘Charhdi Kala’, meaning “eternal optimism.”
There have been at least 246 mass shootings through June 5 this year. That is the same number the country saw through June 5 in 2021 — the worst year on record since the Gun Violence Archive began tracking mass shootings in 2014. (PTI)