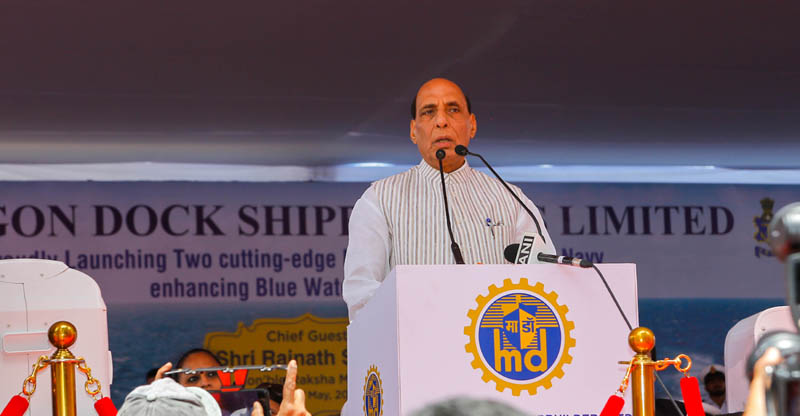 Rajnath to visit Jammu on June 17

JAMMU, June 7: Defence Minister Rajnath Singh will visit Jammu on June 17 to review preparedness of the troops along the Line of Control (LoC) ahead of annual pilgrimage of Shri Amarnath Ji and attend a function to celebrate 200th year of coronation of Maharaja Gulab Singh.
Rajnath’s visit to Jammu comes after two successive reviews of security scenario in Jammu and Kashmir by Union Home Minister Amit Shah in New Delhi on May 17 and June 3 following surge in targeted killings and arrangements for Shri Amarnath Ji yatra beginning June 30.
Rajnath Singh will attend a function being organized to mark 200th year of coronation of Maharaja Gulab Singh. The function is being organized at Hari Niwas.
“The function will be attended by many dignitaries from Jammu and Kashmir,” sources said. They added that the function will be a grand event and Rajnath Singh has given his consent to attend the celebrations.
“The Defence Minister is also expected to review preparedness of the troops along the Line of Control (LoC) in Jammu and Kashmir and hinterland especially in the Valley in view of upcoming pilgrimage of Shri Amarnath Ji and recent surge in targeted killings including minority employees and brave police personnel,” sources told the Excelsior.
However, as per the sources, details of security review are yet to be finalized but since the Defence Minister is visiting Jammu and Kashmir after quite some time and there has been spurt in targeted killings and annual pilgrimage of Baba Barfani Ji is also on the cards, he is likely to hold the security review with Lieutenant Governor Manoj Sinha, top Army Commanders, civil and police officers.
Moreover, Army is going to play a major role in security of Shri Amarnath pilgrims. As per the reports, Army is likely to be deployed on Jammu-Srinagar National Highway along with paramilitary forces base camps at Nunwan in Pahalgam, Baltal in Ganderbal, twin tracks and cave shrine.
“Though previously also Army used to play major role in annual yatra, this year their involvement has become significant in view of sticky bomb threats and hybrid militants,” sources said, adding all arrangements are being made for the pilgrimage well in advance.
The Defence Minister could review the arrangements. The Ministry of Defence has already assured best possible help for smooth conduct of the pilgrimage in South Kashmir Himalayas.
As far as situation on the Line of Control (LoC) is concerned, sources said it is quite normal with no major ceasefire violation since February last year when fresh ceasefire agreement between India and Pakistan had come into force. However, some infiltration attempts are made by the militants which are successfully thwarted by the troops.
Ceasefire agreement has resulted into the border people cultivating their crops right up to the Zero Line.
As per the sources, Union Home Minister Amit Shah could also visit Jammu and Kashmir few days ahead of Shri Amarnath Ji pilgrimage to review security arrangements. However, the schedule hasn’t been finalized so far. He reviewed the yatra arrangements in New Delhi on May 17 and June 3 with Lieutenant Governor Manoj Sinha, National Security Advisor Ajit Doval, Army chief Gen Manoj Pande and top brass of paramilitary forces, Intelligence agencies and civil and police administration of Jammu and Kashmir.
Shri Amarnath yatra has gained importance this year as it is being held after a gap of two years. It couldn’t be held in 2020 and 2021 due to COVID pandemic and was cut short in 2019 by about 15 days ahead of August 5, 2019 decisions of the Central Government to scrap special status of Jammu and Kashmir and bifurcate erstwhile State into two Union Territories of J&K and Ladakh.