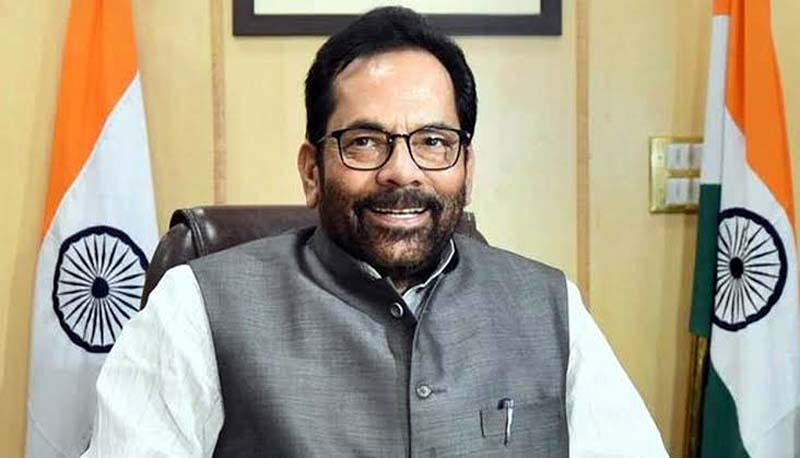 NEW DELHI, Jan 28:
Fiction inspired from real events, a good dose of comedy, romance, action and a positive message for society are some of the traits of Minister of Minority Affairs Mukhtar Abbas Naqvi’s new book, “Balwa”.
The Hindi book, published by Diamond Books, is first of Naqvi’s three-novel series to be out this year.
The other two — “Raj Leela” and “Cyber Supari” — revolve around social and political exploitation of tribals, and fake news, respectively.
“Writing is my passion. Be it late in the night or early morning — after reading the newspaper — I make it a point to write at least one hour for sure. I write for over three hours if it is a holiday. Also, noise or crowded place never distracts me, I can write anywhere,” Naqvi said.
The veteran BJP leader said that he always carries a small diary with him, and whenever an idea – be it about the plot or character of the story – strikes he instantly jots it down.
Talking about the plot of his new book, Naqvi said “Balwa” is a story set in the 90s which centres around two religious leaders Maulana Mushtaq and Sankata Prasad who for their own vested interests try to create communal conflicts.
“Though it is set in the 90s, the story is very relatable in present times too. It brings to light the story of two religious leaders, who act as enemies in public life, but behind the scenes are together in creating communal strife among the common people. Beside, it also talks about the positive role played by administration, media and police to expose their sham,” he explained.
Naqvi, who wrote his last book “Vaisali” in 2008, said it took him almost “two years” to finish “Balwa” and “Raj Leela”.
“Cyber Supari”, he added, would take another month to finish. An all time fan of physical books, the 62-year-old said he never feels at home reading online and would always pick the good old solid hard-bound over reading on a screen.
“Reading on a screen can never match the experience of reading a physical book. It is like you deciding to watch a movie on phone over watching it in a multiplex theatre. Which one will you pick,” he asked.
Asked if he would like to see any of his book adapted into a movie, the minister replied that each of his new three books are apt enough to make for a hit Bollywood movie. (PTI)