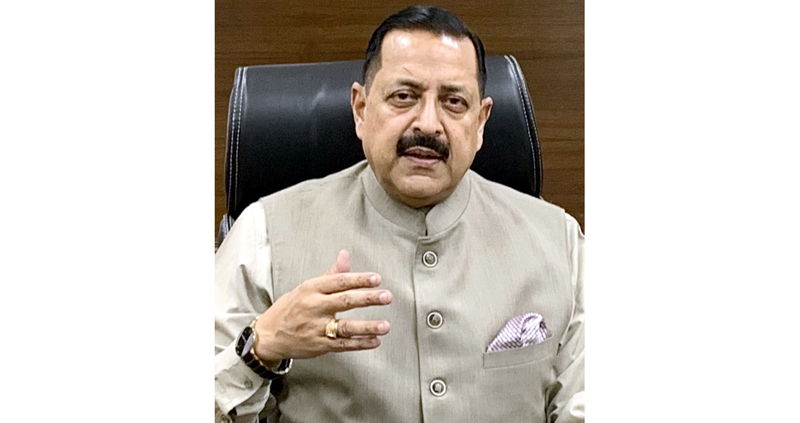 ‘Party to break previous record in UP’

Avtar Bhat
JAMMU, Feb 20: Maintaining that Bharatiya Janata Party (BJP) will emerge triumphant in all the five States in the ongoing Assembly elections, Union Minister, Dr Jitendra Singh today said that the voters are becoming more enthusiastic towards his party which they believe can only give a people’s friendly Government in these states.
Talking to reporters on the sidelines of DISHA meeting for Ramban district which was convened here today, Dr Jitendra Singh said that BJP will break the previous record in Uttar Pradesh as people of all sections of society are more enthusiastic to elect the BJP Government led by Yogi Adityanath for the second consecutive term there. He said electorate in UP irrespective of their religion and caste believe that in the last five years of Yogi’s rule under the overall leadership of PM Narendra Modi, the State has been relieved of mafia and Gunda rule.
The Union Minister said Suraksha,(security), Suvidha (facility) and Samman (respect) are three factors due to which women in UP will enmass vote for BJP. “It was Yogi Government which ensured full security to women in the UP where the Gunda elements ruled the roost during previous Samajwadi Party Government led by Akhilesh Yadav,” Dr Jitendra Singh said and added if you ask the elder women in the State they will say that women and girls were not feeling safe in the State during SP rule and parents were not allowing their daughters to go outside for work. But situation has now totally changed in the State and women are moving freely without fear and threat as the Yogi Government tightened its noose during last five years on Gunda elements in the State and they are on run.
Dr Jitendra Singh said Modi Government created Suvidha (facility) for women by constructing Sochaliyas for them which he named as Izat Ghar and during our Government the women’s Samman (respect) increased. He said that BJP Government constructed toilets for women without any consideration of religion or cast and the Muslim women are also indebted to Modi for these facilities and they have turned the silent voters for the party. The three ‘Ss’ formula (Suvidha, Samman and Suraksha) of Modi Government is going to increase the vote percentage of BJP, he added.
He said the overconfidence with which the SP had jumped the poll fray in UP earlier has totally eroded with the third phase today and the party leadership is now in the State of total confusion and disarray. This can be gauged from the fact that former CM of UP and SP leader, Akhilesh Yadav who is contesting the elections from Karhal seat which the party has considered safest for him has been so baffled now that his entire family has joined the campaigning in this Assembly segment seeing the increasing public support to BJP in the State.
Dr Jitendra Singh said that SP gave nothing to UP except corrupt, Gunda and mafia Raj during its five year tenure earlier. “They promoted the politics of appeasement and the women were not safe in their rule”, he added.
He said “One can compare the five years of rule of Yogi and Yadav and the difference is evident. Yadav Government was run by land grabbers and corrupt persons where there was no value for law of the land”. “A lady was not safe if she ventures outside her house alone during SP rule”, he added.
The Union Minister, while referring to crime against women in the State during SP rule, said in a shameless incident where a female was harassed by some goons during Aklesh rule, a senior leader of the party gave an apologetic justification about crime against women. Maintaining though public memory is short, he said but it is not so short that people will forget everything.
Dr Jitendra Singh said that Yogi Government not only tightened noose on land mafia and musclemen in the State but it ensured security to women and justice to every section of society and the present enthusiasm seen in the people towards BJP shows that the party will win record seats in the State in the ongoing elections as Yogi not only maintained law and order in the State and put it on the path of development and progress but also restored the confidence of the people which had shaken during SP rule.
He said the Gorkhpur where from CM Yogi Adityanath is contesting elections is now not the same Gorkhpur which was five years back. “It is on the path of development,. An AIIMS has been established in this small city and Expressway Corridor has been constructed there”. The BJP does not believe in false promises but it translates its promises and commitment into deeds, he added.
Dr Jitendra Singh said party is also ahead in Punjab as Congress is in the state of confusion and disarray there as its cadre does not know who is their leader. Moreover, there are reports that party is receiving funds from various sources and reports about its links with some groups who are linked to terrorist outfits has shaken the faith of people in the party.
Dr Jitendra Singh said that the voters of Punjab have also realised that the BJP is the only party which can provide good governance to the State and take it on the path of development and progress.