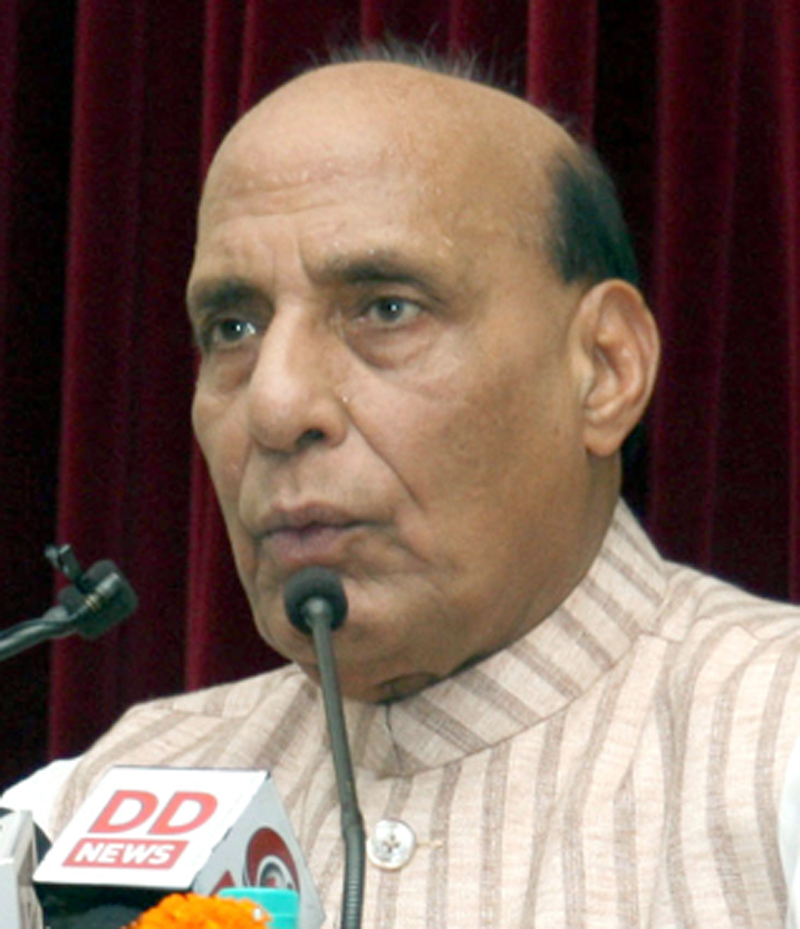 NEW DELHI, July 21: Lauding the heroes of the Kargil war, Defence Minister Rajnath Singh today said he will do his best to ensure that no harm comes to the pride and honour of the soldiers.
Addressing a gathering of war veterans, Kargil war widows and others at an event held here to commemorate 20 years of Operation Vijay, Singh also asserted that people’s “faith in armed forces has increased”.
“Whatever we can do to honour our martyrs is less. We honour them and salute the war widows present here. We feel proud of our soldiers,” he said.
He also shared his experiences of visiting Drass on Saturday, where he paid homage to fallen soldiers at the Kargil War Memorial.
“I can only say this from my side that I will do my best and whatever is possible to ensure that no harm comes to the honour, pride and esteem of our jawans,” the defence minister said to a thunderous applause.
He also said a man could compromise with other things, but not with his pride and honour.
“That pride (‘swabhiman’) could be personal, social or nationalistic (‘rashtriya swabhiman’). It was with this sense of pride that 18-year-olds and 20-year-olds had embraced the gallows during the freedom struggle,” Singh said.
During his Kargil visit, he was given a detailed presentation on Operation Vijay, the Defence Minister said.
Operation Vijay was the name given to India’s limited war against Pakistan after the neighbouring country infiltrated in 1999.
“I was told about the extraordinary valour and indomitable and fearless spirit of our soldiers, who climbed high-altitude peaks despite knowing that they could be shot from the above by the enemy. And they eventually got the victory for us in Kargil,” Singh said.
“The kind of stories I heard, makes me believe that the zeal of an Indian soldier is incomparable,” he said.
The Defence Minister also recalled the bravery of Capt Vikram Batra and his famous words ‘Ye Dil Maange More’ while serving in the Kargil war.
Batra sacrificed his life in action in Kargil and was posthumously awarded Param Vir Chakra, country’s highest war-time gallantry honour.
Asserting that he had met soldiers in Siachen Glacier, barely two days after taking charge as the Defence Minister, only to understand them better.
“People asked me why I did that. I want to say that whatever decision I will take, I will put jawans at the centre of it,” Singh said.
The Siachen Glacier in the Karakorum range is known as the highest militarised zone in the world where the soldiers have to battle frostbite and high winds. Avalanches and landslides are common at the glacier during the winters and temperatures can drop to as low as minus 60 degrees Celsius.
“What our soldiers did during Bangladesh War of 1971, the country will never forget them and after that post Uri and Pulwama attacks, the Balakot airstrike happened. It was a stunning act by our armed forces,” the Defence Minister said.
Singh said continuing the spirit of the generation that fought in Kargil war, many youngsters whose fathers had laid down their lives in the conflict, later joined armed forces themselves.
He also felicitated the war widows present on the occasion, including those who lost their husbands in the Kargil conflict or in the line of duty this year.
The programme was organised by Veterans India at a packed NCC Auditorium in Delhi Cantonment. Jawaharlal Nehru University’s Vice-Chancellor M Jagadesh Kumar was also present on the dais.
New Delhi MP Meenakshi Lekhi also attended the event briefly.
Veterans India patron Maj Gen (retd) G D Bakshi, in his address, appealed to the Defence minister that a “military tank and a fighter jet” be installed on the campus of the JNU, to instil a greater sense of patriotism.
Earlier in the day, thousands of people participated in a ‘victory run’ organised by the Army on Rajpath here to pay homage to the heroes of Kargil war. (PTI)