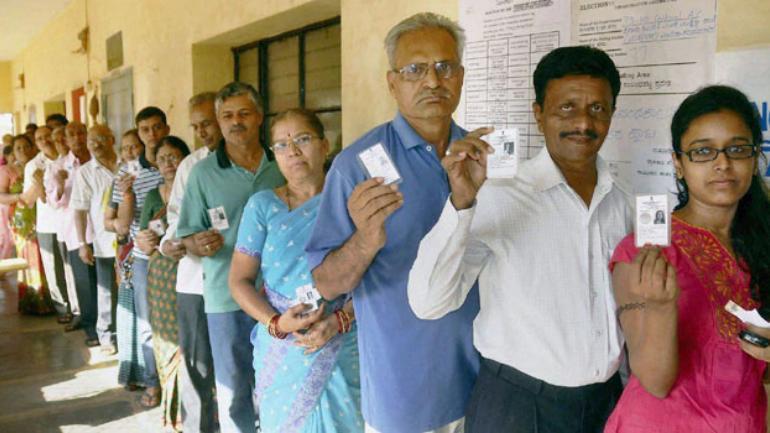 NEW DELHI : Amid reports of EVM glitches, an average 10-14 per cent polling was recorded in the first two hours of voting on Sunday in 59 seats in the seventh and last phase of Lok Sabha elections to decide the fate of 918 candidates including Prime Minister Narendra Modi.

Voting is underway in all 13 seats of Punjab and an equal number of seats in Uttar Pradesh, nine in West Bengal, eight seats each in Bihar and Madhya Pradesh, four in Himachal Pradesh, three in Jharkhand and the lone seat Chandigarh.

In Uttar Pradesh, nearly 10 per cent voting was recorded in the first two hours of polling in 13 Lok Sabha seats.

Varanasi, the constituency of Prime Minister Modi, recorded 10.87 per cent polling till 9 am.

Madhya Pradesh recorded around 13.19 per cent voter turnout in the first three hours of polling in eight Lok Sabha seats.

Long queues were seen at several booths.Some state leaders from Malwa Nimar region of ndore constituency were also seen standing in queues to cast their votes.

“Polling till 9 am in nine Lok Sabha constituencies was absolutely peaceful. We have received no complaints of any violence or any problem from anywhere in any of the polling booths,” a senior IPS officer said.

There were, however, reports of malfunctioning of EVMs from some polling stations.

“We are looking into that. Reserve EVMs are being sent to those polling centres where from we got reports of some machines not functioning properly. Polling there will soon start,” the official added.

In Bihar, an estimated 8.08 per cent of the 1,52,52,608 voters exercised their franchise in the eight Lok Sabha seats in Bihar tll 9 am, an official said.

Altogether 157 candidates including four Union Ministers are in the fray in the seventh and final phase of polling in Bihar.

“Polling has been peaceful with no untoward incidents reported from any of these constituencies, so far except initial reports of EVM malfunctioning,” official sources said.

As per reports reaching from district headquarters, voting was hampered at few polling stations in Ara, Sasaram, Jehanabad, Pataliputra, Buxar.

Prominent among those who cast their vote were Bihar CM Nitish Kumar,

In neighbouring Jharkhand, an estimated 10.48 per cent of the total 45,64,681 voters exercised their franchise till 9 am.

A large number of women and first time voters were seen in queues before booths as polling began at 7 am. Polling will end at 4 pm.

Polling was also underway in all 13 Lok Sabha constituencies of Punjab and the lone Chandigarh constituency, with SAD chief Sukhbir Singh Badal and Union ministers Harsimrat Kaur Badal and Hardeep Puri among those in the fray.

There were reports of technical glitches in EVMs at several places including Ludhiana, Samana and Moga.

Polling began at 7 am in Shimla (SC), Mandi, Hamirpur and Kangra.

In the last phase of Lok Sabha polls, over 10.01 crore voters are eligible to exercise their franchise. The Election Commission has set up more than 1.12 lakh polling stations and has deployed security personnel for smooth conduct of polls.

An average of 66.88 per cent voters exercised their franchise in the last six phases. The whole elections were spread over 38 days. Counting of votes will be taken up on May 23. (AGENCIES)
&&&