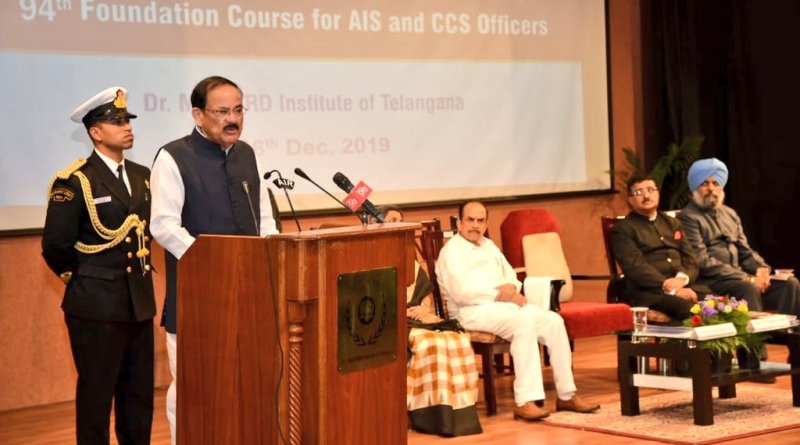 HYDERABAD: Voicing concern over the disturbing instances of atrocities against women, Vice President M Venkaiah Naidu has stressed the need to conclude inquiry, prosecution and trial in a time-bound manner to ensure that justice was delivered on time.

Naidu, who was addressing the valedictory function of the 94th Foundation Course of officers of the All India Services and Central Civil Services at Marri Channa Reddy Human
Resources Development Institute here on Friday, expressed anguish over the recent incidents of rape and violence against women in Hyderabad, Unnao and other parts of the country.

He felt that bringing in a new bill or changing the act was not the only solution, an official release said.

Naidu stressed the need to implement the existing provisions by exercising political will and administrative skill to eradicate evils in the society.

The Vice President advised police departments to be prompt in ensuring that every complaint or grievances brought to their notice was registered.

He stressed the need to conclude inquiry, prosecution, and trial in a time-bound manner to make sure that the justice was delivered on time.

He said there must be both “fear and respect” for the law of the land Naidu said it was time for society as a whole to introspect and ponder over the erosion of values.

He called for collective efforts of the society to ensure that Indian values and culture of respecting women, elders and all fellow human beings were restored.

Naidu asked teachers and educational Institutes to teach children to respect all elders, women and learn the cultural ethos and values of Indian civilization as part of their
education.

He stressed that the most important role of translating Swarajya into Surajya was in the hands of officers.

He emphasized that it would be possible only if governance became corruption free, citizen-centric and business-friendly.

The Vice President asked civil servants and officers to ensure that policy interventions of governments were translated into tangible outcomes at the grassroots level, the
release added.(agencies)