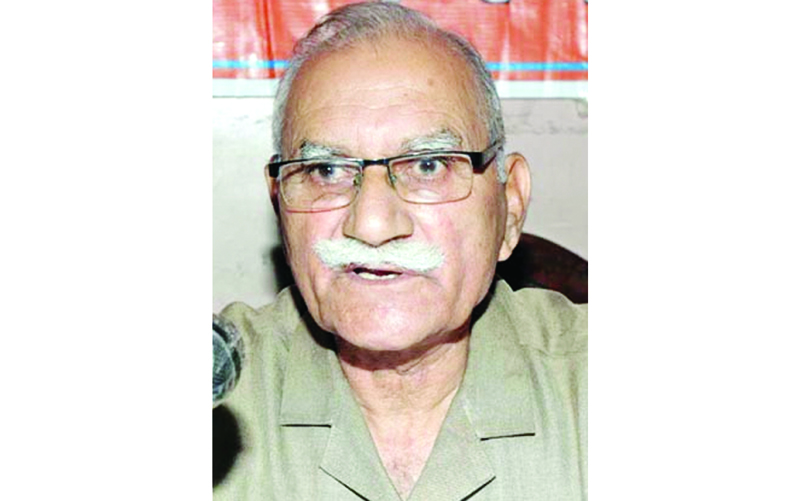 JAMMU, Jan 13: Veteran RSS leader and Prant Sangchalak,J&K Brig (retd) Suchet Singh breathed his last today after a prolonged illness. He was 79.He is survived by his wife Sarita Singh and three daughters. Brig Suchet Singh after his retirement from Army actively remained associated with Sangh to serve the nation.
He took frontline role in 2008 Amarnath land row agitation and uniting nationalist forces in J&K.His cremation will take place at Shastri Nagar Cremation Ground at 2pm tomorrow.
The funeral procession will leave from his Sainik Colony residence in the afternoon. Soon after hearing the news of his death people from all walks of life visited his residence including RSS and BJP leaders.
Union Minister, Dr Jitendra Singh has expressed his profound shock and grief over demise of Brig. Suchet Singh.
He termed him a great patriotic who served the nation till his last breath in various capacities. He said in his demise nation has lost a great, honest and dedicated leader. His death has created a big void which can’t be filled soon.RSS Prant Pracharak, Rupesh Ji and other Sangh leaders have also expressed their shock and grief over demise of Brig Suchet Singh and termed his death a great loss to society.
BJP president, Ravinder Raina, party general secretary, Ashok Kaul and other senior leaders have also expressed profound shock and grief over demise of senior RSS leader.