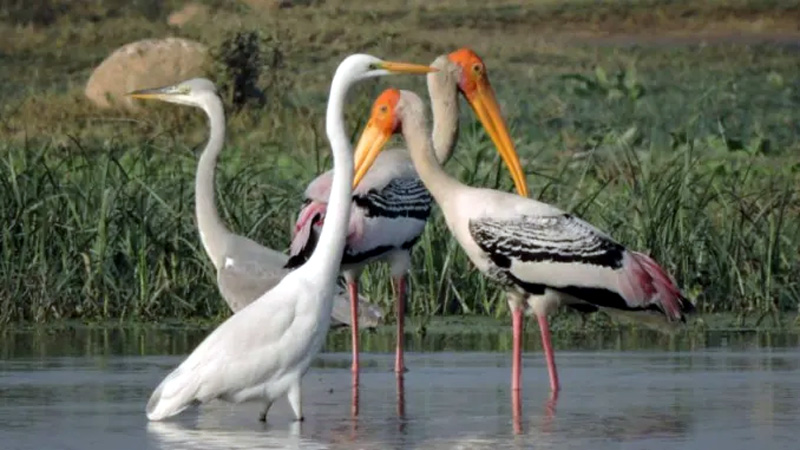 Srinagar, Nov 29: The wetlands are abuzz with the constant tweeting of migratory birds that have flown in from Central Asia, Russia and Northern Europe to spend the cold months in the Valley’s relatively milder temperature.
According to the Department of Wildlife, nearly four lakh avian visitors, including at least 15 new species have already arrived in the Valley, with the number expected to rise in the coming months. These birds migrate from their home habitats in Siberia, Northern Europe, and Central Asia to the Valley’s wetlands to avoid the hard winter.
The birds usually begin their journey well before the start of winter and travel thousands of kilometers to get here. They begin to trickle by October, and by the end of February, the Valley’s wetlands are teeming with colorful and different bird species.
“So far, some 4 lakh birds have arrived, with more expected in the coming months. At least 15 new species have been discovered in the Valley’s wetlands. These wetlands are suitable and act as hatching place for them”, Ifshan Dewan, Wildlife Warden, Wetlands Kashmir, told Excelsior.
There are approximately nine wetlands where these birds rest between flights, including Hokersar, Hygam, Pampore and Bandipora. According to the department, Hokersar receives the majority visitors among all of them.
“Every year in February, we do a census, and last year we counted roughly 7-8 million birds. This year, we are aiming for the same number of birds, “Ifshan remarked.
Because of a staff shortage, Wildlife shooting, which is Constitutionally illegal in Jammu and Kashmir, is looming as a major concern for the department. “We are taking precautions and have set up control rooms at Dal-lake and Wullar, as well as at our headquarters. We are doing everything we can to combat poaching here, “she said.
She informed that they experienced some problems in the Hokersar wetland in the past due to the dredging process, but they made some management interventions and it is now suitable for avian visitation. “The wetland is fit for the avian visitors,” she said.
An official at the department, however, pointed out that migratory birds are always under threat from poachers who kill them outside the wetlands areas that are not entirely protected by the staff. “Due to a lack of personnel, we are unable to put a complete stop to the practice. The birds sometimes move out of the wetlands as they know no boundaries and poachers kill them there. Due to the scarcity of staff, we cannot put a complete check on the practice,” he said.