JAMMU, Aug 16: The 76th Independence Day was celebrated with patriotism and fervour across Jammu region with Advisor to Lieutenant Governor, Rajeev Rai Bhatnagar hoisting the Tricolour at main function held at M A Stadium here.
The Advisor inspected the parade and took the salute from the contingents of JKP, BSF, CRPF, JKAP, SSB, ITBP, IRP, Women Contingent, Forest Protection Force, NCC as well as school children.
In his address, the Advisor said that Jammu & Kashmir is an integral part of multicultural and multi ethnic India. “August 5, 2019 marks a new dawn in the history of J&K and since then the region has embarked on a journey of impartial and equitable governance”, he added.
The Advisor said that due to the events post-reorganisation of Jammu and Kashmir, over 20,000 PoJK refugees have been provided democratic rights and are being recognised equal citizens of the nation while being provided opportunities to be a part of India’s march towards progress. They have also been provided a relief of worth Rs 5.5 lakh per household. 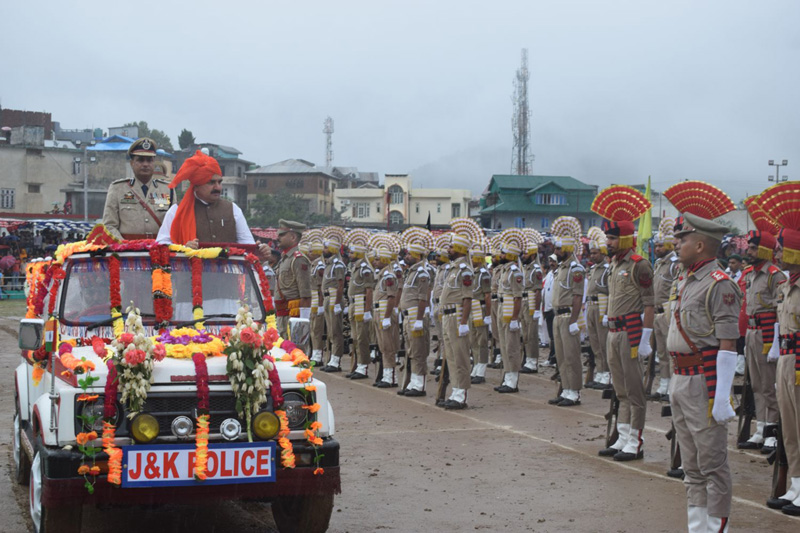 ‘To strengthen the health sector, 500 projects worth Rs 7000 crore have been taken up. Two AIIMS, 7 Government Medical Colleges and 15 new Nursing Colleges are being set up in addition to 2 Cancer Institutes and 2 Bone and Joint Hospitals’, he continued.
Speaking on infrastructure, the Advisor said, ‘J&K ranks third in works under PMGSY for constructing 6452 km roads over the past two years. Moreover, the UT Government has already made substantial efforts in successful implementation of the Har Ghar Nal Se Jal scheme of the Union Government. He also highlighted that the Union Government has given nod to Ujh Multipurpose Project while as the ShahpurKandi Dam project is also slated to be complete by March 2023.
About power sector, he said that projects worth Rs 12922 crore have been sanctioned to ensure that people of J&K are provided round the clock power supply by 2025. In just two years, the Government has revived power projects which would generate additional 3000 MW electric power. Paperwork has completed for generation of additional 3284 MW power at a cost of Rs 29600 crore, the Advisor added.
He also highlighted manifolds tourist influx to the region, efforts being made to make the youth employable by proving trainings through Polytechnics and Industrial Training Institutes, empowerment of young population through Mission Youth and MUMKUN Schemes and big boost to the industries in J&K.
Speaking on jobs, the Advisor said, ‘the UT Government is going to fill 26330 vacant gazetted, non gazetted and class-4 posts on mission mode. He further said that UT administration has adopted ‘zero tolerance stand’ against corruption and all payments are therefore being made digitally.

On the occasion, colourful cultural performances depicting diverse cultural integrity were also presented by school students and artists of Academy of Art Culture and Languages which received thunderous applause from the audience. The Advisor also distributed prizes among the winners of cultural items, contingents, bands. More so, the divisional level winners of National Anthem Singing Competition conducted by Department of Information and Public Relations were also felicitated on the occasion.
Among others, Mayor JMC, Chander Mohan Gupta; Principal Secretary to Lieutenant Governor, Nitishwar Kumar; Additional Director General of Police Jammu, Mukesh Singh; Divisional Commissioner Jammu, Ramesh Kumar; Deputy Commissioner Jammu, Avny Lavasa besides Administrative Secretaries, PRI members and officers and officials of all the departments participated in the celebrations.
RAJOURI: The Independence Day was celebrated across the Rajouri district with great fervour and national spirit. The main function was organized at District Police Lines Grounds where the chief guest, District Development Council Chairman, Naseem Liyaqat unfurled the National Flag and inspected the parade. Deputy Commissioner Rajouri,Vikas Kundal and other officers of district administration were present on the occasion.
In all, 22 contingents of JKAP, JK Executive Police, JK Police Band, CRPF, JK FPF and SPOs, besides student platoons of different schools presented an impressive parade, led by DySP Parupkar Singh.
In his address, the DDC Chairman highlighted the significance of the day. “The day stands as a reminder of the sacrifices made by our freedom fighters to get independence from British rule” he said, adding “it is the most significant day in the history of India as on this day the sun of independence dawned on the horizon of our motherland, and the National Government came into power after a prolonged struggle and we became an Independent and sovereign nation.’
Meanwhile, he listed the achievements made in the district on development, economic and social levels. Later, the DDC chairman felicitated the winners of District Level National Anthem and students with outstanding academic and sports records. 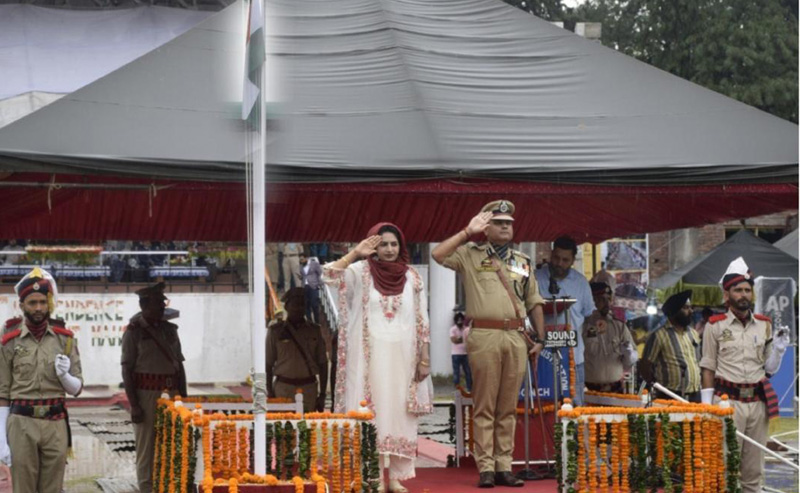 POONCH: Chairperson District Development Council Poonch, Tazeem Akhter hoisted the Tricolor and took salute at the march Past. Guard of honour was presented by JK Police which was followed by an impressive Parade by the contingents of JKP, CRPF, JKAP, NCC, J&K Home Guards, J&K Police QRT Commando, J&K Police Band and various Government and private schools.
Vice Chairperson DDC Poonch, Ashfaq Ahmed, Deputy Commissioner Poonch, InderJeet, Senior Superintendent of Police (SSP) Rohit Baskotra, DDC member Loran, Riaz Bashir Naz, ADDC Abdul Sattar, ADC Dr Basharat Hussain, , besides other officers from Civil, Police, Judiciary, Ex Legislators, prominent citizens, social workers, political activists attended the function. A Large number of men, women and children were present on the occasion.
In her address, the Chief Guest said, “it is the most significant day in the history of India”. He stressed that the people of Poonch should work together for promoting national integration, communal harmony and peace in the district. She counted numerous developmental projects and works undertaken in the district.
The celebrations were marked by a cultural programme based on the theme of nationalism and integrity presented by the students of degree College/Schools and other Cultural groups of the district. The programme culminated with the distribution of prizes among the participants. The winners of National Anthem Singing Competition-2022 which was organised by Government of UT of Jammu and Kashmir, were also felicitated.
Cash prizes were also given to winners and runner ups in Singing, Essay Writing and Debate competition organized by JKAACL.