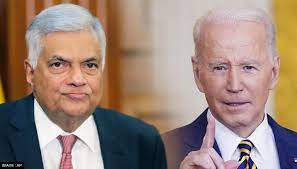 Washington, May 24: The US development agency has pledged support to the people of Sri Lanka, saying that it is committed to helping the island nation weather the financial crisis.
Sri Lanka is facing its worst economic crisis since gaining independence from the UK in 1948. The economic crisis also triggered a political turmoil in the island nation with citizens holding nationwide street protests for weeks over lengthy power cuts and shortage of fuel, food and other daily essentials and demanding the ouster of President Gotabaya Rajapaksa.
On Monday, Samantha Power, the US Agency for International Development (USAID) administrator, held a telephone conversation with Prime Minister Wickremesinghe to discuss how USAID is responding to the country’s political and economic crises.
“Administrator Power expressed her sympathy for those Sri Lankans who were killed or injured in the political unrest earlier this month. She pledged her support to the people of Sri Lanka and committed that USAID would help the country weather the crisis. She stressed the need to urgently undertake political and economic reforms to gain the trust of the Sri Lankan people,” USAID spokesperson Rebecca Chalif said in a statement.
“Power underscored that USAID is pivoting its ongoing programmes in Sri Lanka to help address the urgent needs of Sri Lanka’s most vulnerable and marginalised communities as they experience the economic shocks, compounded by rising food, fuel and fertilizer prices due to Russia’s unprovoked war against Ukraine,” Chalif added.
“Power assured the Prime Minister that USAID would closely work with other donors such as the IMF, the World Bank, G7, and others to support Sri Lanka during this extraordinarily difficult period,” she said.
A crippling shortage of foreign reserves has led to long queues for fuel, cooking gas and other essentials while power cuts and soaring food prices heaped misery on the people.
With the economic crisis and the shortage of forex, the Indian credit line of USD 500 million for fuel imports has provided a lifeline to the island nation.
The ADB as well as the World Bank has just promised around 160 million each to Sri Lanka.
Sri Lanka is now negotiating a loan with the IMF. The country had to pay USD 106.34 million this year but only managed to pay USD 12.4 million by April.
In this challenging time, on May 20, the Group of Seven (G7) nations announced that they will assist Sri Lanka in securing debt relief.
The G7 comprises the UK, Canada, France, Germany, Italy, Japan and the United States. (PTI)