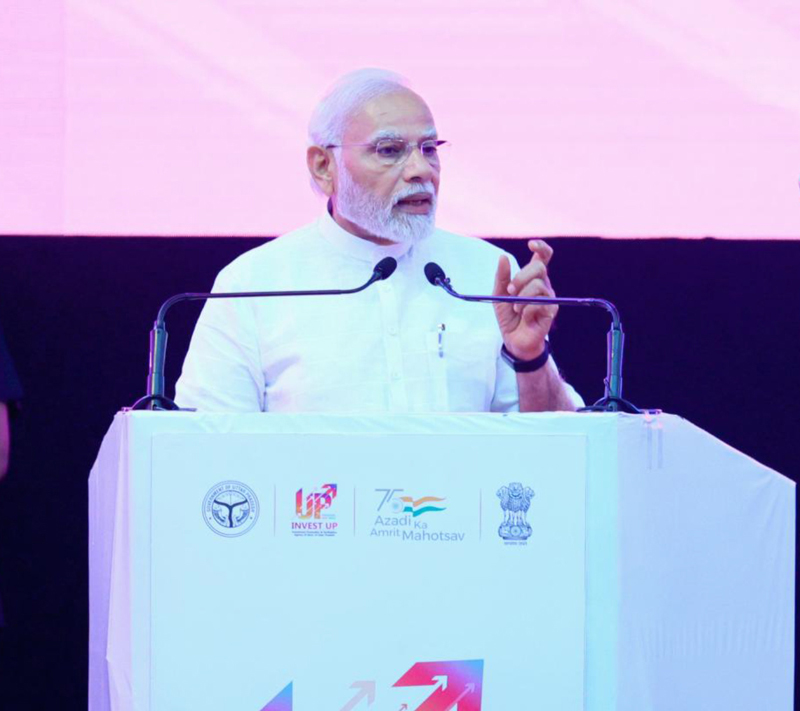 Lucknow, June 3: Prime Minister Narendra Modi today said that Uttar Pradesh will give momentum to India’s growth story. Saying this, Modi offered ‘golden opportunity’ to the investors in the agriculture sector. In the ground breaking ceremony held in Lucknow on Friday, PM Modi said that with Ganga flowing through 25 to 30 districts of Uttar Pradesh covering around 11,000 kilometres, with the provision in the Union Cabinet for building a natural farming corridor on both sides of Ganga for a stretch of five kilometres each, in addition to Uttar Pradesh Government’s food processing policy, investors have a ‘golden opportunity’ in the agricultural sector.
Participating in the third ground breaking ceremony of the Global Investors Summit at Indira Gandhi Institute in Lucknow, PM Modi also invited the leading tycoons to visit his parliamentary constituency Kashi to explore the investment opportunities there.
PM Modi remarked, ‘it is not a small thing that a government has been re-elected in UP for the second time in a row after a span of more than three decades. It shows that the Government has earned the confidence of people. Investors are willing to invest in UP because of the improved law and order situation, investment-friendly atmosphere and the infrastructural development taking place under the leadership of Chief Minister Yogi Adityanath. Economic zones in the state are getting connected with expressways while multimodal logistics hubs are also being set up.’
I am confident that Uttar Pradesh, with its consumer base of 16 per cent, will give momentum to India’s growth story. Every sixth man in the country is from Uttar Pradesh. More than a dozen towns in the state have a population of over 5 lakh. Every district has a special product, which is being promoted by the Government. The state has the highest number of MSMEs. The state produces all grains and a wide variety of seasonal fruits and vegetables”, the prime minister pointed out.
Modi said that India has been going from strength to strength despite challenges like Covid because of the strong policies of the Government. ‘The world today considers India as the only reliable partner. It appreciates our potential and performance. Despite Covid, India accelerated the pace of its reforms. India is the fastest growing country among G20 countries today. India ranks 2nd in the Global Retail Index and third in energy consumption. In the last financial year, we received FDI of $ 84 billion from around 100 countries. Our mercantile exports worth $417 billion have also set a record.’
The Prime Minister said that the Government’s focus is also on the defence manufacturing sector and has stopped import of around 300 military equipment as part of its Atma Nirbhar Bharat (Self-Reliant India) Mission, creating opportunities for investors in this field.
The Prime Minister said that in the last eight years of his government, a culture has developed to complete projects on schedule. Speaking on digitalisation, Modi said: “Almost 40 percent of the total digital transactions around the globe are taking place in India. There are 78 crore broadband subscribers today against 6.5 crore in 2014. Similarly, the price of 1 GB data has dropped from Rs 200 in 2014 to Rs 11-12 today. Besides, there is 28 lakh km of optical fibre today compared to 28 lakh km in 2014. In 2014, less than 100 gram panchayats had optical fibre, while today it covers 1.75 lakh village panchayats. There are 4 lakh common service centres and 70,000 registered startups.
Modi said that the government is working towards creating a strong manufacturing ecosystem and supply chain through facilitating hassle-free setting up of new ventures. He added that schemes like one nation one tax, one nation one mobility card, one nation one ration card reflect the solid policies of the Government.
Speaking on the occasion, CM Yogi said that the third ground breaking ceremony will see the launch of 1400 projects worth Rs 80,000 crore projects in various sectors including IT, agriculture, data centre, manufacturing and textile creating 5 lakh direct and 20 lakh indirect employment opportunities.
He added that while the unemployment rate of UP has dropped from 18 percent in 2016 to 2.9 percent in April, 2022, the export has gone up from Rs 88, 000 crore to Rs 1.56 lakh crore during the period.
On initiatives taken for ease of doing business, Yogi said that a single window system offering 349 online services has been set up under which an investor gets land within 15 days of submission of his application.
Defence Minister Rajnath Singh, Industrial development Minister Nand Gopal Gupta Nandi, Chairman of Adani Group Gautam Adani, Kumar Mangalam Birla and Niranjan Hiranandani also spoke at the event.