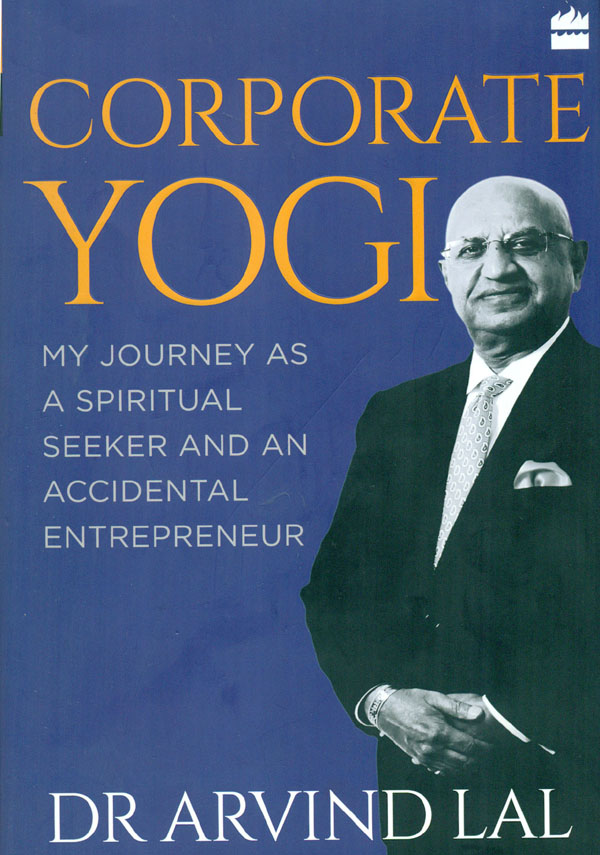 Name of the Book : Corporate Yogi
Author : Dr. Arvind Lal
Publication by : Harper Collins
Publisher, Noida (UP)
Year : 2018
Pages : 257
Price : 599
This -257 page book entitled “Corporate Yogi” has been authored by Dr. Arvind Lal, owner and promoter of ‘Dr. Lalpaths’ the largest diagnostic laboratory in South Asia . It is graphic biographical story regarding author’s spiritual journey and his association with revered Guru Haidakhan Baba in Uttarakhand, whose teaching is: Satya , Saralta, Prem, Karama Yoga and Japa Yoga . His mission was to revive Sanatana Dharma. There are no short cuts and no particular methodology but sincere effort for spiritual enrichment by all human beings.
” The Corporate Yogi” has been launched during April 11, 2018 by Bollywood actress Priyanka Chopra who herself is a devotee of Haidakhan Babaji , who always stressed on love, compassion and truth above all things.
Inspiring Story
On this occasion, she observed , it is imperative to promote spiritual pursuits while chasing worldly dreams, while Dr. Lal underscored that spirituality, it made him more tolerant compaasionate , loving and hardworking in his work environment. The author has made graphic narrative of all his rich and varied experiences of life and his spiritual advances under guidance of Babaji and also his enterprise, Lalpaths’s move forward.
It may be mentioned that the author of this book has been awarded Padma Shri, conferred the honorary rank of Brigadier, bestowed Best Entrepreneur of the Year during 2016 and after subsequent year given Lifetime Achievement award in 2017. There is a road named after him in Pune. He also remained honorary Physician to the President of India, bringing high quality laboratory services in India. . All this is attributed to his spiritual pursuits and also blessings of the great guru Baba ji , a beacon light of spiritualism.
The central figure of this book, Haidakhan Babaji’s main stress was on Karma Yoga so that we as a nation are always more productive individually and collectively. He firmly believes that “Shanti ke liya kranti bahut zarrori hai” (for peace, , revolution may be necessary). He endorsed the maxim “one must learn to obey only then can learn to command”.
He has numerous devotees from the Bollywood, business and other fields. The network of his Ashrams are spread across the globe now. Noted actor Shammi Kapoor was also his disciple.
Babaji could read minds and absorb an individual’s life story with one look , and the devotees believed that he knew all about the past and could predict the future
Exciting Experiences
This “Corporate Yogi” book is divided mainly in ten Chapters giving detailed account of Dr. Arvind Lal’s biographical sketch , his pursuits of spiritual journey and also put some light on his family as also on some saints and seers as also his great enterprise work .The chapters include : “Finding Babaji”, “Karama Yoga and Japa Yoga”, Mahatmaji and his Guru”, ” Saints and Seekers’, The World according to Babaji”, “Babaji and the Art of Healing” “Modernizing Medical Diagnostics”, ” Love in Time of Babaji’ and the last one” A Break in the Journey”. The language has been couched in a lucid, simple but stylish way to make the narrative quite absorbing and sustain the interest of the readers.
Spiritual Quest !
The book unfolds the unique story of spiritual journey of Arvind Lal , his mother Vimla Lal, other family members and friends. I read the book with deep inquest and interest about author’s experiences during his spiritual sojourn under the inspiring guidance of Haidakhan Babaji. This had wide-opened his window of wisdom, vision and compassion. All this also raised his intellectual level and sharpened the entrepreneurship as a corporate Yogi. This book speaks volumes about the intellectual faculty of this medical professional coming out also in the literary field.
Must- Read Book
“Corporate Yogi” has been aptly described by Dr. Karan Singh, Chairman Auroville Foundation in his foreword: “in this book Dr Lal has not only described his own spiritual quest but has also introduced his guru Haidakhan Baba’s teachings including Karma Yoga and japa yoga which will be of immense interest to spiritual seekers”. Dr. Pranav Pandya of All World Gayatri Parivar has a good word for it as well as the author.
Some of the rare photographs, focused on Babaji in meditation and also few on the author, further add to the merit of this book . Another feature is 42-page Appendix of important information.
The book has been well produced , finely printed and in superb literary style in effective communication mode. While this volume is very useful for the spiritual seekers , it also has particular importance for the youth. Each and every citizen must go through this inspiring book to ignite their spiritual spirit.
(Starline Syndicate Service)