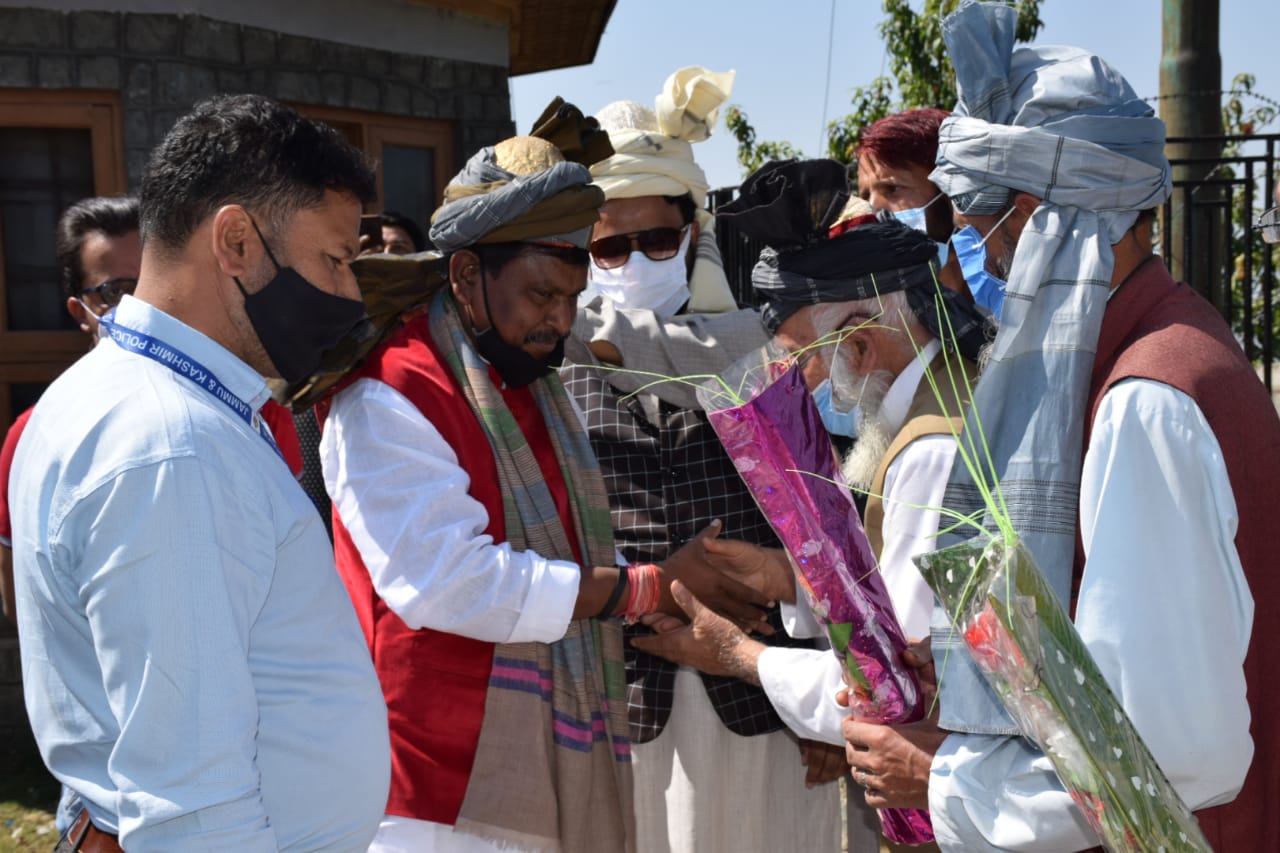 BANDIPORA, Sept 16: Union Minister for Tribal Affairs Arjun Munda today visited Bandipora as part of the ongoing public outreach programme of the Union Government.
The minister inaugurated several developmental projects and interacted with multiple public delegations, members of Panchayat Raj Institutions and political parties besides interacting with youth especially sports persons.
He inaugurated a bridge at Bapora in Arin block that connects Arin with tribal areas. He also inaugurated a newly constructed Panchayat Ghar.
Secretary Tribal Affairs Dr Shahid Iqbal Choudhary, Deputy Commissioner Dr Owais Ahmad, SSP Bandipora Mohammad Zahid and other senior Officers of the district were present on the occasion.
While talking to public delegations, the minister told the tribal population of the district that government has launched many welfare schemes that shall change the socio-economic condition of the tribal population with special focus on skill development and employment generation.
The Union Minister also said that the Government has initiated a number of measures for the welfare of tribal communities. He said his ministry has recently approved a project for Tribal Transit Accommodation at eight locations to be constructed at an estimated cost of Rs 28 crore.
Munda said that the Department of Tribal Affairs is taking steps for effective implementation of The Scheduled Tribes and Other Traditional Forest Dwellers (Recognition of Rights) Act 2006. He said the District Level and Sub-Divisional Level Committees have been constituted while the Tribal Affairs department is also working on developing community facilities.
While talking about tribal health plan he said The Tribal Affairs Department in coordination with National Health Mission and Department of Health and Family Welfare has rolled out a special Tribal Health Plan for the first time. An amount of Rs 15 crore has been earmarked for the year 2021-22 which will include establishment of Tribal Sub-centres, mobile medical care units for migratory population, machinery and equipment, capacity building and emergency response system.
Munda said that the UT government is shortly scheduled to roll out an ambitious scheme for establishment of 1500 mini Sheep Farms at a cost of Rs 1500.00 Lakh during the current financial year which will provide employment to 3000 tribal youth. The scheme will be an annual affair and every year Sheep Farms with 33% additional number shall be established, he added.
The minister added that the department recently authorized work on 16 Milk Villages at an estimated cost of Rs 1600.00 Lakhs which will provide employment to around 2000 youth and establish a network of dairy farms in J&K.
The Union Minister also said that the government recently constituted a Working Group for establishment of Tribal Research Institute (TRI) headed by Secretary Tribal Affairs Department to take key steps for establishment of TRI museums, cultural centres and also putting in place an administrative framework which will go a long way in preserving the tribal art, culture, tradition, languages, literature and their promotion. TRI is also in process for organising a number of programmes and rolling out tribal fellowship programme.
Munda said that the Tribal Affairs department has rolled out an innovative “Tribal Youth Engagement Programme” under which notification has been issued for selection of 500 youth in advanced and future skills.
The minister added that the Department has also approved Rs 300.00 Lakh project for developing Home Stays in 15 villages. Additionally, youth groups can avail Rs 10 Lakh under Mission Youth scheme of Tourist Village Network, he further said.
Later the Union Minister visited SK Stadium Bandipora and participated in sports activities besides inspecting stalls erected by various departments to showcase their performance and with an aim to create awareness about various welfare schemes being offered by them for the youth.
He distributed prizes among winning teams and players of various sports that were going on in the district including football, volleyball and tug of war.
The minister while interacting with the sports persons appreciated them for taking keen interest in sports and urged them to be the beacons of peace. He said they will inspire other youngsters to utilize their energy in positive way. He assured every possible support from the government to uplift the sports infrastructure in the district.
Sharing the vision of the Prime Minister, Sh Munda said that the PM wants his ministers to assess on-ground situation and take feedback from the public. “The PM wants to ensure that the people’s lives are being touched and positive change is brought”, the minister said.