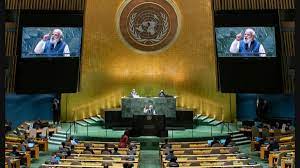 UNITED NATIONS, Jan 18: India has said that the UN-facilitated intra-Sudanese political process, which is aimed at keeping the transition process on track, needs to be Sudanese-led and guided by a constructive approach.
Speaking at the UN Security Council briefing by the International Criminal Court on Sudan, Counsellor in India’s Permanent Mission to the UN Pratik Mathur noted that the resignation of Prime Minister Abdalla Hamdok reflects the inherent challenges to the transition process.
“The UN-facilitated intra-Sudanese political process which is aimed at salvaging the situation and keeping the transition process on track needs to be Sudanese-led and guided by a constructive approach,” he said.
Mathur said the Constitutional Declaration signed in August 2019 should drive this process and all stakeholders need to display flexibility, mutual trust and understanding.
“It is crucial for the military and the civilian leadership to reach an amicable solution to take the transition process forward. The transition process should continue to address issues related to justice and accountability,” he said.
India stressed that as “we look forward to Sudan’s successful completion of the current transition phase, we remain confident that Sudanese people will overcome the current challenges and strive further ahead on their road to peace and development.”
Delivering the ICC’s 34th report on Darfur to the Council, ICC Prosecutor Karim Khan said nearly 20 years after the UN Security Council referred the Darfur situation in Sudan to the International Criminal Court (ICC), victims and survivors of atrocities are still seeking justice and accountability, according to a UN press release.
The Darfur conflict began in 2003 between Sudanese Government forces and Darfur rebel movements.
Hundreds of thousands were killed, while many more were displaced. In 2005, the Security Council referred the case to the ICC, which is investigating allegations of genocide, war crimes and crimes against humanity.
Mathur said the Transitional Government of Sudan had shown readiness to address issues relating to transitional justice, including accountability for human rights violations, through a truth and reconciliation process.
He said the parties to the Juba Peace Agreement have also agreed to establish a Truth and Reconciliation Commission in relation to Darfur, and a Special Court for Darfur Crimes.
The jurisdiction of this Special Court, which will include matters relating to genocide, crimes against humanity and war crimes since 2002, is a step in the right direction.
“This pursuit of justice for victims of atrocity crimes in Darfur is also reflected in the cooperation shown by the Sudanese authorities. It is important that all sides continue to engage on outstanding issues to find mutually acceptable solutions,” Mathur said.
Mathur said as Sudan transitions to a peaceful, stable and prosperous future, there is a need to provide it with all the assistance to redress the issues of the past, promote inter-communal harmony and protect the fundamental rights of all its citizens.
He added that in this context, it will be important to build capacities of the national judicial institutions. (PTI)