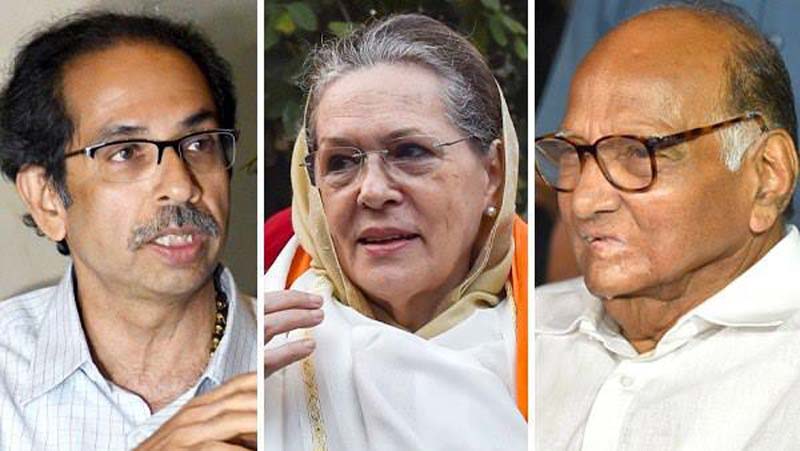 Mumbai, Nov 22: The new government in Maharashtra will be led by Shiv Sena chief Uddhav Thackeray, NCP president Sharad Pawar said today, signalling end of speculation on who will occupy the Chief Minister’s post as efforts to install a non-BJP dispensation in the state gathered pace. Emerging from a marathon meeting of top leaders of the Congress, the NCP and the Sena, who are making efforts to form Government in Maharashtra, Pawar said there was a consensus on Thackeray’s leadership.
“The issue of leadership is not pending. There are no two opinions on the issue of chief ministership. There was a consensus on Uddhav Thackeray leading the new government,” he told reporters after the meeting. When asked if Thackeray, who is not yet a legislator, will be the new chief minister, Pawar shot back, “Don’t you understand Hindi. The new government will be led by Uddhav Thackeray.”
Asked about Pawar’s statement on Thackeray’s leadership, Sena MLA Eknath Shinde, who attended the meeting, separately told reporters there was “no discussion on that issue”. Shinde, who was elected as the leader of the Sena’s legislative wing last month, is seen as one of the contenders for the chief minister’s post.
Pawar said the meeting at Nehru Centre at Worli deliberated extensively on agenda for governance for the prospective dispensation. “There will be a press conference tomorrow after everything is finalised,” said the former Union minister, who is at the centre of government formation talks in Maharashtra, where assembly poll results were announced nearly a month ago.
Thackeray, who emerged from the meeting soon after Pawar, said the talks were held in satisfactory manner. “The talks (on government formation) are progressing in the right direction. Nitty gritties are being discussed now. All the three parties will come before you and all details will be shared after finalisation,” he said. Shinde, Subhash Desai, Sanjay Raut (all Shiv Sena), Ahmed Patel, Mallikarjun Kharge, K C Venugopal, Avinash Pande, Balasaheb Thorat, Prithviraj Chavan (Congress), Praful Patel, Jayant Patil and Ajit Pawar (NCP) took part in the meeting.
The state has been facing a political crisis after the Sena broke its three-decade-long ties with the BJP after the latter declined to share the chief minister’s post. The BJP and the Sena, which fought the Assembly polls in alliance, had secured a comfortable majority by winning 105 and 56 seats, respectively, in the 288-member Assembly.
The NCP and the Congress, pre-poll allies, won 54 and 44 seats, respectively. The combined tally of the Sena, the NCP and the Congress is way beyond the majority mark of 145. The state is currently under President’s rule. (PTI)